The Sexiest US WNT Players: Who’s #2? 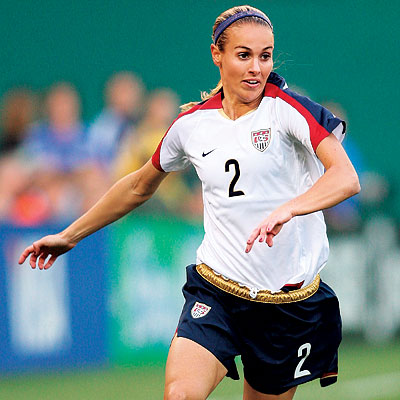 Well, while she may technically (and by that I mean objectively) be hotter than my #1 selection, she isn’t as crucial to the team or as talented, so I think she only deserves the #2 spot. In addition, while she is still quite the looker, it’s just a fact of life people…

Both men and women get older, and the older you get, the less amazing your body looks. It’s a sad and harsh truth.

While Mitts seems to be an exception to that rule, one must admit she is not quite as hot as she once was. But, that’s like saying the Grand Canyon is not quite as impressive on repeat viewings. It’s still a pretty darn impressive sight, as is Ms. Mitts, who is also one of the WNT’s defenders who has stood the test of time and hoisted many trophies.

In fact, her play is a big reason she is #2 on this list. Many other WNT vets have retired and moved on to other endeavors, but Mitts is still out there trying to make her national team the best it can be. Plus, the team needs veteran leadership, and she provides it. Veteran leadership has never looked so sexy either, has it (see left)?

So, it is with great pleasure that I announce Heather Mitts is the second hottest US WNT player currently on the squad (and historically perhaps the #1 babe and still a ridonculous cougar). Please, direct your hatred at me for (a) making her #2 or (b) being such a male chauvinist in the comments below and come back next Wed. to see who bested Ms. Mitts for the #1 spot.