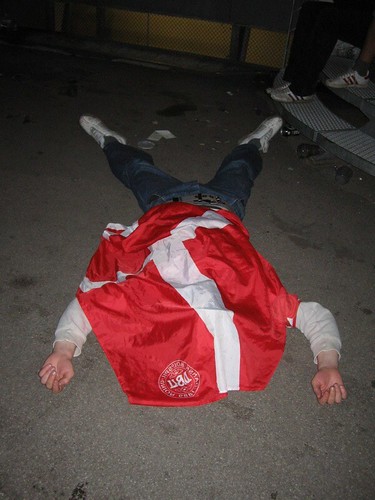 The Team: Some people call Denmark’s national football team “Danish Dynamite.” I – on the other hand – think that moniker sounds more appropriate for some strange shot of liquor than a soccer squad. The fan in the pic has apparently had a few too many such concoctions, and now he is physically ill. Well, maybe he didn’t drink, since the Danish team has been known to induce vomiting in their fans. They have a long history but few major trophies.

The Cream: The biggest hunk of hardware that has thus far evaded them is the Jules Rimet, itself. This will be only their fourth opportunity to own the world by winning the World Cup, and they hope to improve on their best ever finish, the Elite Eight in 1998. In order to do so, the following gentlemen (who have been plying their trade all over Europe and beyond) must perform: Bendtner, Tomasson, Jensen, Agger, Kroldrup, etc. If only they had Schmeichel!

The Dream: Don’t get me wrong, Sorenson is no slouch in goal, but Schmeichel was perhaps the finest keeper to ever play between the pipes. If Sorenson can channel Schmeichel (I smell a sports movie), this team could surprise a lot of people in Africa. I think Denmark is vastly underrated and could be one of those darkhorses that pays big. I’ll put their odds of winning the World Cup at 55:1 because if they do win, they will at least please their 5.5 million countryman.

That’s how many people live in Denmark.

And if they win, they’re all be calling in sick the next day thanks to my Danish Dynamites!