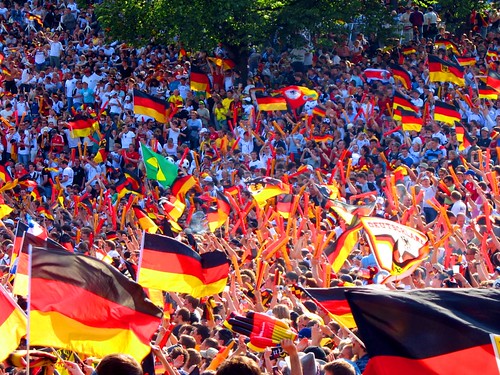 The Team: Germans are nice folks, but students of history will tell you to be wary of the “Krauts”, as Walter from The Big Lebowski would call them. After all, those gregarious Germans did stir up a lot of trouble last century, what with their constant desire for world domination and all. Luckily, we kept those sausage loving sons-of-bitches from forcing us all to speak their truly ugly language (it may be the world’s toughest to listen to). But what about their soccer side?

The Cream: Their teams have always been strong (even when they were divided by a wall), and they are looking like darkhorse candidates to hoist the 2010 World Cup in South Africa. They have much to feel confident about. They cruised through qualifying (while surviving Tom Cruise’s Valkyrie). They overcame many obstacles due to the thrilling play of their several stars, including Klose, Ballack and Podolski. These Krauts can play the beautiful game.

The Dream: Remember when I said I hate the German language? Well, its because – like the Dutch – they decide to make their words way too damn long. Take the “German National Football Team”. Sounds good in English right? Now, let’s see the translation in German: “Die Deutsche Futballnationalmannschaft.” Um, I don’t know about you, but I don’t think you can put “die”, “douche” and “man shaft” in the same sentence. Maybe I am just lost in translation, but I don’t think Germany will win it all at the World Cup. In fact, I’ll put the odds that they win the 2010 World Cup at 15:1.