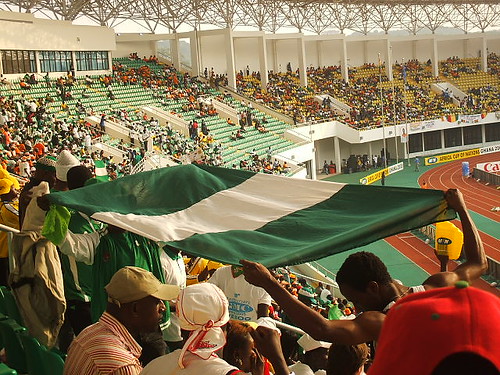 The Team: The Nigerian National Team is known as the Super Eagles. Now, these Super Eagles do not have Donovan McNabb or Andy Reid (can you imagine?), but they do have several superstar players and savvy coaches. In fact, they are one of the strongest African teams. Well, maybe historically speaking. After all, they have recently fallen to third on the continent (behind Cameroon and Ivory Coast) in FIFA’s official rankings. Their 2010 draw was poor too.

The Cream: But, with several stars playing in foreign leagues, Nigeria does have a decent chance to escape the group stage in South Africa. Aiyegbeni is a strong striker who could have success whether paired with Kanu, Martins, Obasi or all three. “Obi”-one (Mikel John Obi) of Chelsea can dish and plays with determination and Yobo has shut out many talented strikers over the years. They have some talented players, but can they actually hoist the Cup?

The Dream: I have a strange feeling an African nation may end up in the World Cup Final. Now, I don’t think one will win it, mind you, I just have some sort of gut instinct that somebody from the continent will get invited to the mother of all Big Dances. Nigeria certainly could be that squad. After all, they have a solid lineup and will be in front of semi-friendly crowds (maybe not, after all, many continental neighbors do not get along). I think their odds are long, 100:1.