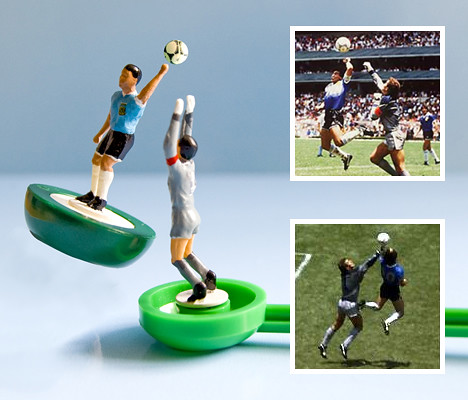 The Team: As soon as someone brings up the soccer team from Argentina, the conversation inevitably turns to Diego Maradona. How could it not? The man defines their style of play and is undoubtedly their greatest legend (and some say everyone’s greatest legend). It is fitting he will lead Argentina in South Africa. Maybe Henry can knock them out with the “hands on” management style he showed during qualifying. Justice is justice, no matter when it comes.

The Cream: Lionel Messi? Well, I could use this entire space telling you what you already know about his seemingly superhuman skills at striker. Instead, why don’t we actually talk about his stellar supporting cast. After all, there are 10 other superstars on the pitch with him when Argentina plays. So, here are a few of the most intimidating names on Maradona’s roster: Mascherano, Gago, Tevez, Milito, Zanetti, etc. Heck, Argentina could field a nasty B Team.

The Dream: Maradona is either going to emerge from this World Cup as soccer’s favorite resurrected son, or he is going to go down in flames and probably fade out of the game altogether. After all, if there is one thing we know about Maradona, it is that he is not going to waffle, he is either going to be spectacular or fail spectacularly. Well, he may go to Waffle House, but that is another matter. I think ARG succeeds, but falls short in the end, so their odds are 8-1.