Group A is Still Wide Open 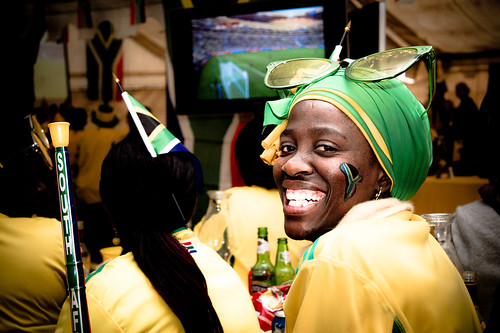 Group A’s first round ended with all four teams drawing one another.  The result was seen by many fans as a great disappointment, but the reality is it will make for an exciting finish.  Let’s take a look at the four teams and the matches they each have left:

South Africa looked tentative in the first half and played mostly on the defense and they were lucky a few times that Mexico lacked the key finish in the box, but at half time they improved and made several brilliant runs including that 55th minute goal by Siphiwe Tshabalala where he blasted it into the net with the left foot.  So far it is the best goal in the World Cup in one Yank’s opinion.  To advance though they have a tough test in Uruguay and France.  Neither team showed top form, but both have supreme talent at forward and will be matched up with a mediocre defense in Bafana Bafana.

Mexico lacked the offensive play maker in their first match and none of their young stars could take advantage in the first half.  The squad did equalize late in the match, but that was off of a set piece and the goal was scored by a defender.  Against a defensive minded squad like France I think they will likely draw 0-0 and Uruguay showed defensive promise as well.  Mexico outplayed South Africa for most of the game, but was lucky to walk away with a point considering that ball off of the post in the 90th minute that silenced the horns.

There most famous living legend has bashed the squad and their coach, many of their star players appear distracted and unmotivated, and their coach has already been replaced following the tournament.  Not much good can be said about France’s recent problems with, well, themselves, but the good news for the squad is that they settled for a point despite playing rather poorly.  Henry did get some late minutes off of the bench where he made some good exchanges, but at that point in the match France had the man advantage, but still failed to truly impress.  If Henry is going to come in late then he needs to be paired up with Anelka not replacing the speedster.

I criticised Uruguay’s defense heading into the tournament and after seeing the way they bottled up France’s front four I must admit that i was completely shocked by the Sky Blue squad.  Forlan had a few chances to seize the day, but could not be the hero the country needs.  One critical miss in the box feet away from the goal might be costly for the squad considering their remaining matches against the host nation and arguably the best team in the group.  It is critical that they win their next one because Mexico will likely play their most aggressive football in the final match.