Gilardino Uncertain Over Future At Fiorentina 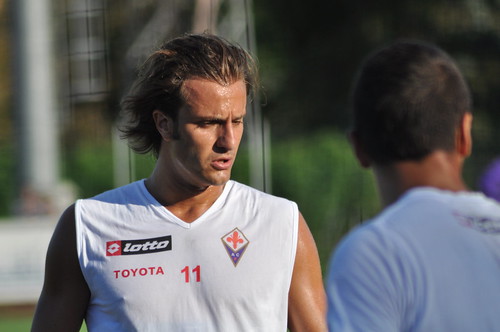 Having yet to feel a heavy improvement in his career with Fiorentina, Alberto Gilardino, seems to have hesitation about continuing his journey with the Tuscany based club. Speaking to the Italian media.

Gilardino revealed that he is not sure whether he would remain in Firenze or not this summer because there are several things that he is currently thinking about, mainly his contract.

“I don’t know if I will stay. I don’t want to say one thing and then do another. The transfer market is still open for some time yet.I’ve always said that I am happy in Florence, but there are a few things that need to be looked at,” Gilardino stated. “One is my contract,I’ll speak with the club and make a decision with them seeing as I am valued at €18m and I have two years left to run on it.

Although stating that he has no issues or problem that could force him to leave Fiorentina, Gilardino admitted that he is considering his options for the upcoming season. Moreover, the former Ac Milan striker revealed that should he leave the Viola this summer, the striker will probably went for another Italian team since he still wants to be called up for the Italian national team. The 29-years-old believes that by staying in Serie A his chance of being monitored by the Azzurri’s coach, Cesare Prandelli, would be much bigger than if he goes abroad.

” The European Championship takes place next summer and I’d like to remain in Italy ahead of it,” Gilardino added.

However, in the future, Gilardino himself wouldn’t rule out a move outside of Italy stating that he actually would like to try playing in Spanish La Liga or English premier league, as both competition are very attractive in his eyes. Still, considering his age it might be difficult for the striker to play in those foreign league if he doesn’t move this summer as should he sign for another Italian team in the upcoming season, it would probably take 1-2 more season before he’ll be able to play abroad.

“I would like to try playing abroad at some stage though. The Spanish and English Leagues are certainly fascinating, “ said Gilardino