Ghana Lone African Representatives in the Round of 16 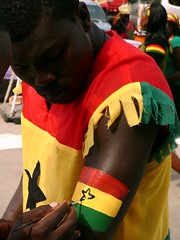 Ghana booked their ticket to the round of 16 today after losing 1-0 to Germany in their final group match. The Ghanaians go through to the next round second in their group – to perennial powerhouse Germany, of course — ahead of Australia in Group D on goal differential.

Touted by many to be the African side most likely to find success at these World Cup finals, the Ghanaians have not been without their fair share of France-esque controversy. They should feel lucky to be through, to be perfectly honest. Both of their goals so far have come from penalty kicks and they’ve failed to score against sides that were down to ten men on both occasions. In addition, they have been plagued by a fantastic amount of dressing-room drama. Being a team made up of younger players (they’re the youngest team at the tournament), managing the egos of older and veteran players has posed a challenge. The incessant hum of gossip surrounding Ghana was directed at star midfielder, Sulley Muntari, who was alleged to have turned into a dressing room and training ground nightmare – successfully driving a wedge between players and creating cumbersome divisions within the team. The Ghanaian FA went as far as publicly reprimanding Muntari earlier this week for having a go at Ghana’s manager, Milovan Rajevac. Muntari had apparently felt that he was not getting enough playing time and wasn’t shy to make his opinion known to the boss in ways that were less than diplomatic.

Regardless of the soap opera antics and their lack of attacking prowess, the extent of doom and gloom being projected onto Ghana’s performance thus far has been, for the most part, unwarranted. Distractions from the final goal have been abundant and yet despite the rocky road, they’ve managed to beat a path to the knockout stages. Rather then celebrate the fact that Ghana have gone through, the negative feelings — and column inches — being dumped onto African football as a whole has overshadowed the achievement. The emotions bleeding out of newspaper pages have been schizophrenic, rollercoaster-like, and hard to keep track of. On the day Ghanaian striker Asamoah Gyan scored against Serbia in their opening group match, the Black Stars were the toast of Africa. Black Star’s captain Stephan Appiah choked up in a post-match interview after the Serbia win when he said that ‘All Africa is united.’ Not a fortnight later, after word began to leak about Muntari’s behaviour at camp, the side became a national embarrassment. Other African teams have not been spared a similar fate: Nigerian midfielder Sani Kaita is now facing thousands of death threats in his home nation on account of the red card he received during Nigeria’s match against Greece. So much so that he has been cautioned against returning home, being advised instead to go directly to Russia where he plays his club football. The confusion surrounding how African supporters ought to feel about their own game has been immense. Perhaps the press’ unrepentant focus on African football’s shortcomings and the inversely cliché-ridden and optimism-bloated cola adverts that have riddled our television screens for several months have been no help.

Ghana will play the USA in the round of 16 on Saturday.