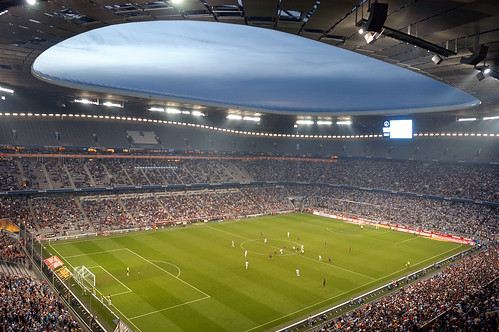 Germany has advanced to the second round of the FIFA World Cup fourteen straight times since 1954.  And only one time have they lost their second round match.  In other words the nation has high expectations to advance for a fifteenth straight time to the knockout rounds.  They now a lot is at stake and anything less than a second round berth would be considered unacceptable.

Heading into the final first round matches, Ghana is the only African team that is either leading a group or in second place.  The team has four points and won a critical opening match against Serbia, but last match with a man advantage over the Socceroos a 1-1 draw has to be considered a huge disappointment.  It will not be easy this final match either, but a draw would seal a spot and a loss would end their hopes due to the likelihood of Serbia beating Australia.

Miroslav Klose is not going to be featured in the lineup today due to a questionable red card received last match against Serbia.  Last Cup’s leading goal scorer has averaged five goals per Cup for the last two and nobody else in the Cup can match his career total.  His absence means Podolski needs to step up and be the key finisher.  The forward is still shaking off a rare penalty miss for Germany in the second half of that 1-0 loss.

Kevin-Prince Boateng has been a player of interest to the German squad over the last month.  Not because the Portsmouth player is also German and actually has a brother that plays for the German side, but because of his controversial tackle of Ballack in the FA Cup final that ended what is likely the 33 year old’s last Cup experience.   The man from Germany has received death threats and been a huge target recently in the news.  Many people have had this match marked on their schedules due to the drama surrounding the man responsible for Ballack’s absence.