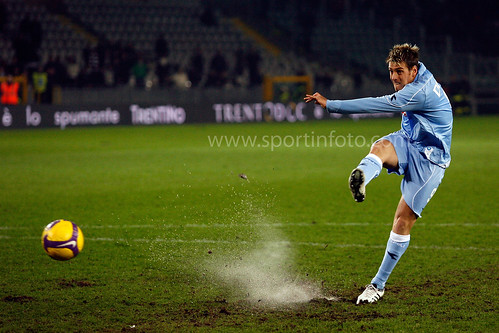 Atalanta’s weekend match-up against Ac Milan is also being noted by the press as a duel between two current Serie A top forwards, German Denis against Zlatan Ibrahimovic, as both are the top two scorers in the league at the moment.

Trying to relieve the personal pressure on him, Denis simply stated that he wont try to embark in a personal battle with Ibrahimovic and will only play to help his team gets all three points.

Despite not pressuring himself with a goal against Milan, Denis obviously won’t mind if he does manage to score against the Scudetto holder, especially since he already had the experience. The ex-Napoli man remind everyone how he successfully bagged a goal against the Rossoneri last season, where he helped Udinese snatching a 4-4 draw in San Siro.

The game is Atalanta versus Milan and not Denis versus Ibrahimovic. It will be great if I do manage to score on Sunday, but the important thing is that Atalanta actually win the match. I know how to score against Milan as I have already done that, Last year I put Udinese 4-3 up [in the 89th minute] at San Siro, but then Ibrahimovic invented that goal [in minute 93]” Denis explained.

Arriving pretty late in the summer transfer market from Udinese, Denis made a pretty remarkable impact with Atalanta as he surprisingly managed to lead the top scorer list in Serie A with 12 goals, one above Ibrahimovic. The Argentinian striker’s goals obviously helped his team’s success in reaching the 11th place, a pretty good spot considering they are suffering points deduction from the start of the competition.

Should the Bergamo outfit didn’t get penalized, their points are actually enough to put them competing in the top five place as they will be level on points with current fifth place holder, Inter Milan. Atalanta’s home record is also pretty good this season, this would definitely gives them confidence ahead of the match against Milan this weekend.