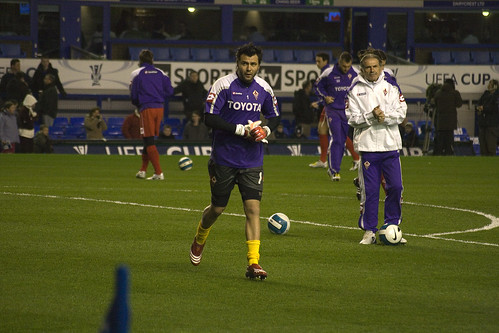 Already missing out on one of their new goal keeper targets, Salvatore Sirigu, who moved to Paris Saint-Germain, Genoa, move fast in securing their other candidate, Sebastian Frey from Fiorentina.

Without making any more delays, the Grifone announced an official statement stating that an agreement have been reached between the club and the French goalie and next week after completing his medical.

Frey, who has been cast away by his club from pretty much most of last season due to injury, showed his willingness in joining Genoa by agreeing to cut his wage. A pretty bold decision made by the French keeper but it’s understandable as he is being promised a first team spot at the Grifone, something that he is looking for at the moment considering he hasn’t played much last season.

“President Enrico Preziosi has reached an agreement with Fiorentina over the signing of the French goalkeeper. The transfer will be ratified next week after Frey has completed his medical.Frey, who seemed very motivated in his meeting with the Preziosi family, strongly wanted the Grifone by also accepting a pay cut,” read an official note from Genoa.

The quick decision made by Genoa is pretty much an obvious one since not long ago the club’s president, Enrico Preziosi, has confirmed that there are only two main targets to fill the goal keeper position in his club, Frey and Sirigu. Unfortunately, just as the Grifone are still weighing up their choice, PSG suddenly snapped up the young Italian keeper, leaving Genoa with only one option left and obviously isn’t willing to lose anymore ground, they acted swiftly in landing Frey.

Genoa’s need for keeper arrives after the club decided to sent away their number one goalie last season, Ricardo, after a rather disappointing season, where the Portuguese was highly inconsistent and making several costly blunders. The choice of Frey itself is being made simply because the French keeper is someone who is very experienced in Serie A and not only that, the ex-Parma keeper used to be rated highly among top clubs but major injury last season dropped the interest on the goalie.