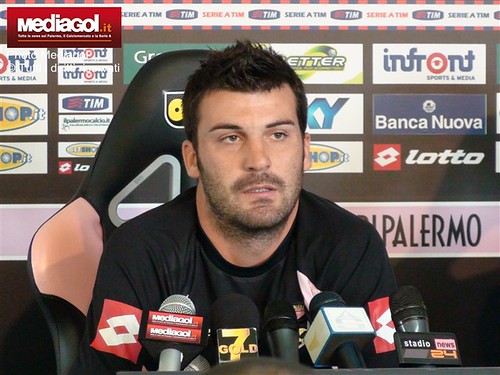 Another interesting twist occurred in Serie A transfer market, notably known as”calciomercato’, after the latest report suggested that Cesare Bovo, who supposedly only a medical away from signing with Fiorentina, was hijacked by Genoa.

This news is simply a bit surprising as few days ago, as Bovo is all be set to join Fiorentina, with only medical check up left but apparently Genoa managed to steal the player from the Viola’ grasps. The former As Roma youth is set to be officially announced as the new Griffone player on Thursday once he finished his medical check up with the Marassi outfit, which will also be held sometime tomorrow.

Bovo is actually an important figure for Palermo, as he is also being given the captain armband after Fabrizio Micolli, however, the signing of talented Catania defender, Mattias Silvestre apparently gave the Sicilian side a confidence that they are more than covered at the back. Genoa’s action in hijacking Bovo in front of Fiorentina’s nose could make things very interesting as the Marassi outfit is reportedly very keen in purchasing the Viola’s top striker, Alberto Gillardino, who until now is still being kept away from outside offers.

Moreover, reports from Italy also stated that Bovo is expected to sign a three years deal with Genoa and join the likes of Kakha Kaladze, in leading the ambitious mid table Italian side, who are eagerly trying to enter the European stage once again. The Griffone has been pretty active in the transfer market especially starting from last season, although that haven’t been that successful as just yet. This season, the Marassi outfit is very eager to sign some top names in Italian football because their fans are a little bit upset with the club’s decision in selling their star players such as Domenico Criscito to Zenit St. Petersburg and Stephane El Shaarawy to Ac Milan this summer.

Meanwhile, the latest report from Italy revealed that Palermo have confirmed Bovo’s move to Genoa and it’s to be said as a season loan deal with rights of redemption after the season ends in 2012. Unfortunately, there haven’t been any new details regarding the cash supposedly involved for the deal, but more reports might be unveiled once the player finished his scheduled medical check up.