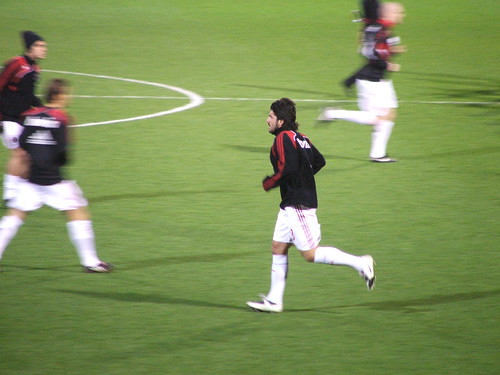 Ac Milan hit double success this weekend on Serie A as not only they managed to take revenge over their old rival Juventus, but they also keep their pace in the top of the table and leaving Inter Milan in second place by eight points before the Nerazzurri played on Sunday.

In a rather tough and tight game, the Rossoneri have their captain Rino Gattuso as an unlikely hero after his goal in the second half was more than enough to seal the victory for the Red and Black squad in Turin.

Coming into the game with half of their mind in the upcoming Champions League clash against Tottenham Hotspurs, Milan put out a pretty strong attacking line up despite losing Alexandre Pato right before kick off due to flu. Resting Robinho on the bench, coach Massimiliano Allegri chose to start Antonio Cassano alongside Zlatan Ibrahimovic with Kevin Prince Boateng acting as the trequartista behind the front two.

Juventus themselves were also playing without Alberto Aquilani in the midfield and once again opted Luca Toni-Alessandro Matri duet up front with Milos Krasic and Jorge Martinez acted as wingers to support the duo attackers. The match start in a pretty good tempo as Milan looked the more dangerous in front of goal, with Ibrahimovic blazing his shot over the bar and Cassano incredibly ballooned over his shot after making a fine individual move to fool the Juve’s defenders.

The first half ended in a stalemate with the home team barely created any danger for Milan aside from wayward long range shootings that didn’t even troubled Christian Abbiati on goal. The second period started in a rather similar way with Juve still playing the waiting game, letting the Rossoneri keep hold of the possession and looking for a way through the packed Bianconeri’s defense. Midway into the second half, the away team got the breakthrough that they probably deserved as Gattuso popped up into the penalty area and send out an awkward drive that beats Gianluigi Buffon.

The goal lifted the tempo a bit as Juventus are forced to get forward more but it’s all seems to late with Milan already controlling the pace of the game and could’ve added more goals should their attacking play were much more sharper. Despite putting in his last card on Del Piero in the final 10 minutes of the game, the home team still unable to give much problems for the Rossoneri expect through some messy dead ball situations from free kick and corners. As the final whistle blown, Ac Milan were pretty much the deserving winner although they weren’t playing a good football, but still a very solid display from Allegri’s team that managed to keep their keeper from making any single save in Turin.