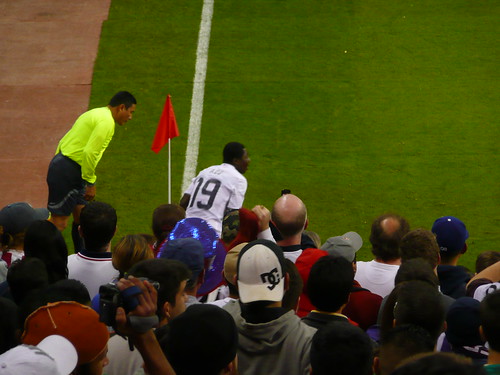 Remember back in the day when Freddy Adu was going to be the Michael Jordan of soccer?

Back then Adu was just 14 years old and playing professionally in the MLS.

Back then Adu was considered a child prodigy and by most football critic’s projection it was only a matter of time before he would be dominating the rest of the world.

Back then things were different.

Swiss club Sion recently brought in the young winger for a week-long training session and the fairly unknown squad decided at the end of the week that it was better to part ways then to sign the Benfica man from last season. And on the club’s website they had plenty of kind words to describe Adu’s many talents, but the club admitted that they didn’t believe they could offer the proper role for the burner.

So Adu, now 21 years old, will continue looking for work overseas while in reality he should return to the MLS.

Last season Hull City nearly snagged Adu and that would have been even worse of a situation then Sion would have been. Adu is at that learning age in football and he needs minutes on the pitch rather then making his club selection based strictly off prestige. He can learn from the best and breath in all of the history of these European leagues, but until he actually plays and performs at a high level the education abroad will never offer as much as his own domestic league.

If Freddy Adu ever wants to be a key national team player then he needs to score goals and dominate once again. If he can beat about the Ching’s and Buddle’s of the world for MLS honors then he will begin to frequently pick up more caps and he could possibly make that big move after a successful MLS stint.

But if the guy continues bouncing around big squads that don’t need his services then he will always be that guy that was really, really good when he was fourteen.