Four Tips For You Hooligans Out There 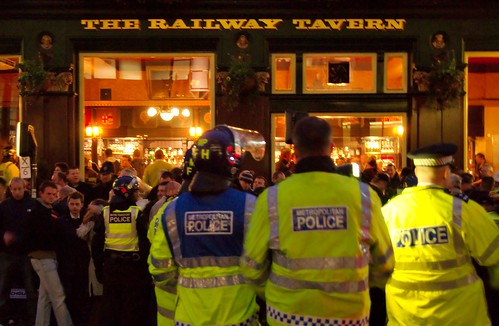 I was reading an old copy of Maxim and the popular men’s magazine suggested these four tips to European soccer fans when visiting a famous mob-friendly stadium. Stick to these tips and you will survive the experience.

When visiting a grand stadium recognize the “safest” places to exit towards in case of an emergency. For example open areas are considered the best places to head to and also nearby exits are an important thing to know. You don’t have to be a tourist with stadium blueprints and maps galore, but knowing or recognizing these things could help out in a state of panic.

It’s never good to go against the grain or swim against the tide and in the case of a soccer stadium emergency this concept remains the exact same. Always make sure you move with the crowd rather then against it and doing so will assure your own safety. Of course if the mob you are following is all jumping off of a bridge then please refrain from doing so yourself. As you know you shouldn‘t jump off of a bridge just because you‘re friends are.

3) Use the Seats To Your Advantage

It’s important to go with the flow of the crowd as long as the masses are moving. If they are not then racing to the aisles might not be a very good idea considering the area is backed up with panicking people. Take to the seats where you can individually climb each one and eventually make it to the top. This avoids being overrun or backed up in a frenzy of folks.

If you are unfortunate enough to be knocked down in a crowded area make sure to use your hands to cover your head. Also use your elbows to cover your ribs as well in a fetal type of position. It’s not the most macho suggestion, but it just might save you from a serious knock to the noggin or a crack in the ribs.

I apologize if this list scares you or makes you think twice about heading to a soccer match. The only other piece of advice I would give is to support the home team wherever you go to watch a match. But keeping in mind these tips will only guarantee that you will be that much more safe and that you will enjoy the match that much more.