For Your Team or Your Country? 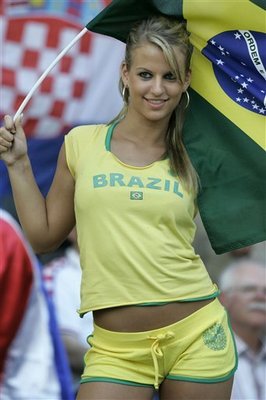 So far this season squads from all around the world are taking their fair share of hits from this classic question.  Which is more important, your team or country, and at what cost?

Cristiano Ronaldo played in a match that may shorten his career due to this feud.  Real Madrid tried to prevent this from happening by benching their star and in fact lost without him in there.  Portugal ignored the request and as a result Ronaldo may not make it back in the lineup until next calender year with an ankle injury.

A similar situation is beginning to brew in Serie A between AS Roma and Brazil.  Brazil is well known to the world for two things.   The first is winning big World Cup matches and hoisting trophies.  The second thing that Brazil is well known for should be obvious by the picture located to the top left..

So when Brazil decides they need a player they are a hard team to convince otherwise.  Roma stars goalkeeper Doni and defender Juan both missed last weekends action against Inter with leg injuries.   The squad still got the needed draw, but is not currently too pleased with Brazil for putting the two men on their roster for their upcoming friendlies against England and Oman next weekend.

Just like Portugal, Brazil is fully aware of the potential disastrous situation they could get their own national squad members into, but they have decided to list the players anyway.  I find this move to be mind boggling because Brazil has more depth then just about any squad in the world.  If players are not at full health for a friendly then they should sit.

Especially when your team is as hot as Brazil.