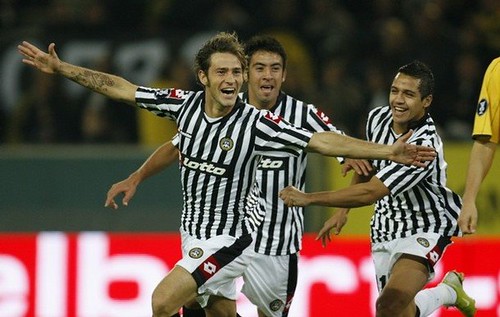 Rejecting an offer from a big club may not be a popular choice for many football players, however that that’s the thing that Udinese’s striker, Antonio Floro Flores, has done after reports from Italy suggested that he  rejected Juventus’ bid and move to Genoa instead.

This news  was unveiled just after the players’ representative, Paolo Palermo, stated that  Floro Flores hasn’t make a final decision as just yet, the striker did indicate his interest in playing at Genoa after seeing the enormous crowd atmosphere the Griffone had.

The decision between the two clubs is entirely down to up. At the moment I couldn’t really say what he’ll choose,” Palermo said. “He would have the chance to play straight away at Juventus as well, but he has always liked Genoa. Yesterday he was in the stands against Sampdoria and said the atmosphere of the stadium reminded him of the San Paolo in Naples.”

Not long after that statement, Genoa have just officially announced Floro Flores’ signing which is being done in a form of a season loan worth around 1 million Euro with an option to permanently seal the deal next season for 8,5 million Euro. The striker will immediately join his new team for a training session on Monday afternoon as he is being set to replace Giuseppe Sculli, who already move to Lazio and also Luca Toni, who already signed for Juventus earlier this month.

Just like the agent said, it seems that Floro Flores’ personal judgment is the key in choosing the club that he goes to this winter especially knowing the fact that he would play straight away in either Juve or the Griffone considering the crisis that both teams have in their attacking department. Juventus, have almost all of their strikers missing due too injury problems and they don’t seem able to attract bigger names at the moment, while Genoa are pretty much a club that keeps on making transition this season as there’s so many players come and go from the club.

Floro Florese himself hasn’t had the playing time he needed with Udinese this season especially after the Bianconeri bought German Dennis from Napoli, who is being opted as the replacement for Antonio Di Natale. Being pretty much the third guy in the rooster, moving away would definitely be a good option for the striker, as his quality is pretty much appreciated in Serie A especially after performing pretty well for the Udine side in previous seasons.

Aside from Juventus and Genoa, Floro Flores, was also being courted by other teams in the league including Ac Milan just before the Rossoneri decided to take Antonio Cassano as part of their attacking department. Surely the fact that the striker opted Genoa instead of Juventus could torn a bit of the Turin giant’s pride as this season they already failed to land some of the big names that the media linking them with such as Edin Dzeko, Karim Benzema and Fernando Torres.