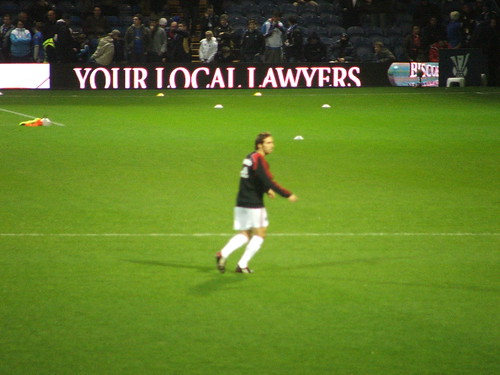 Inter Milan and Napoli’s victories on Saturday puts Ac Milan under a little bit pressure in securing the Scudetto title but the Rossoneri come away with a deserved victory, despite having a rather nervy and lucky end to the game against Bologna this Sunday.

A rare goal from French midfielder, Mathieu Flamini, early in the first half decided the game as the Rossoneri were guilty of being wasteful once again nearly giving a live line for Bologna, who maybe feel a bit bitter after having a player sent off in the later stage of the game.

Playing in a full packed crowd at San Siro, the Rossoneri’s intent to take all three points that would bring them even more closer to the title were visible right from the start as the home team looked very sharped in pressing their opponent. Completely dominating the game, it only took eight minutes for Milan to take the lead as a lovely move from Flamini ends up in the back of the net despite being blocked by Bologna’s keeper, Emiliano Viviano at first, but the goalie spilled the ball and the Frenchman simply didn’t miss out on his second attempt.

After the goal, the Rossoneri gets even more confident as they simply outplayed the visitor and keeps on creating several goal scoring chances, notably by Antonio Cassano and Kevin Prince Boateng, unfortunately despite leading, the nerves seems not completely gone from the Milan players. In the second half, things started out in almost similar to the first period especially in the early part which still say the home team missing out several good goal scoring chances, that simply giving a life line for Bologna, that suddenly came to live in the last 10-15 minutes of the game.

The Rossoblu seems to pile on the pressure and started to create several chances, albeit most of them came from dead ball situation, still it kinda worried the Milan fans, who have been singing all day long. The relief almost arrived though for the Milanisti, but once again in the final minutes, the Rossoneri players were unable to convert several good chances that they good, resulting in several comedic errors in front of Bologna’s goal. During having a good spell of pressure, a rather unfortunate event happened for the away team as they lose a player, Della Rocca, who received a rather harsh marching order.

With just three minutes of extra time and finishing the game with a player advantage, Milan just see through Bologna’s resistance and kept the ball on the away team’s half in the final minute. Just as the referee blows the final whistle, the Rossoneri are getting closer on achieving their main target this season, which is securing the Serie A crown back after being dominated by their rival neighbor in few last season. With three games left in the league, Massimiliano Allegri’s team only needs one point to secure the title that they haven’t won since 2004.