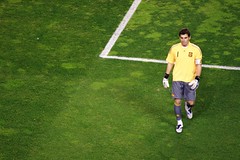 Blaming Iker Casillas’ girlfriend seems to be in vogue right now but anyone with even a sliver of common sense knows that Sara Carbonero, a TV presenter who also happens to be Casillas’ girlfriend, had nothing to do with this even if she was in the stadium… standing behind his goal during his warm-up… and conducted what must have been the most surreal interview the Spanish keeper has ever had to give right after the match.

Here are a few substantive reasons for Spain’s not-actually-so-shocking shock loss to Switzerland.

A lot of the blame is being heaped on Casillas but let’s not forget the folly that was on display in the Spanish defense, namely by Barcelona’s Carles Puyol. He was simply dismal. Beyond awful. It was his poor decision-making that gave the Swiss enough room create excellent chances the few times that they did manage get come forward. Fair enough that a nation of fans suffering unexpected defeat needs someone to blame but come the heck on: Casillas coming out of goal in such a foolish manner, feet first and all, was not the be all and end off this match. It was a Puyol error that contributed heavily to the only goal of the match. When Puyol left Derdiyok foolishly unmarked, he was the one after all who created a clear path into the area, which led to Derdiyok and Fernandes capitalizing on Puyol’s initial error and Casillas’ resulting one.

There is so much to be said for match practice and Torres simply didn’t have enough of it coming into this. Sure, he’s one of the best strikers on the planet but peaking at the right time is key at the world cup. Nothing replaces being able to come into a tournament feeling confident about your fitness and having enough match practice to succeed. It only takes seven games to win a world cup after all — doesn’t exactly leave any time for working yourself into peak condition does it?

Not that the passes were particularly good – see: David Villa’s cross into box in the first half. Where was he even aiming? It was the best chance they had on goal in the first half and it was as if he’d completely lost track of the where the goal even was. In need of some basic geography lessons perhaps? Spain seemed to suffer from a severe bout of over-elaboration. Everyone knows that the Spanish like winning in style rather than simply getting the job done, but what we watched last night wasn’t even passing without style: Xavi and Iniesta looked downright clunky, pedestrian even.

The Swiss gave a master class in defending yesterday. Even after former Arsenal defender Philippe Senderos came off the pitch injured (apparently he’s out for the next two matches), they were able to stifle any sort of attack the Spanish attempted to build. They didn’t give them the space to maneuver and even though the Spanish had the lion’s share of possession they were forced back into their own area over and over. Defending was tight, goalkeeping was excellent and, as a result, decent chances came very sparingly for Spain.

You can thank Jose Mourinho and his pervasive non-football brand of football, which has permeated football tactics the world over. Due to Mourinho’s success winning titles with Inter through his use of a heavily defensive style rather than gaining possession and labouring to get the ball forward, managers are going to attempt to emulate his success using similar tactics like the Swiss have. Spain will need to learn to cope with opponents who are going to employ this new perpetually defensive style in order to find success in this tournament.