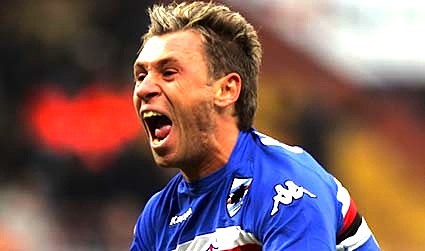 Antonio Cassano’s recent row with his club Sampdoria left the door opens for other clubs to acquire his service next January, among some teams that have been linked with the Italian international it seems that Fiorentina can be leave out from the list.

The Florence club that previously being placed as one of the contenders to snatch the controversial player, have rejected the rumors stating that at this moment they don’t need the ex-Roma player on their squad.

Fiorentina’s denial in being linked with Cassano was revealed by the club’s sporting director, Pantaleo Corvino, who stated that in January last year, the Viola does consider to sign the Italian international but this season they lost interest on him. Corvino revealed that the availability of Adrian Mutu, who already had his ban lifted last last week, is the reason that the Florence club opted to pass on Cassano should the ex-Real Madrid player does move from Luigi Ferarris next winter.

“He was a step away from joining us in January, but he is no longer of interest because we have Mutu,” Corvino stated. “I don’t know where he will go or whether he will join a big club.”

Corvino statement can be considered as a bold one as despite of Mutu’s return, Fiorentina could actually use the help of another creative force such as Cassano considering the long list of injured players that they have. The Viola currently are missing the likes of Stevan Jovetic and also Ricardo Montolivo, who are both unavailable due to injury, the first one won’t even be available until next year.

However, it seems like the controversial character if Cassano could also affected Fiorentina’s decision bringing the 28-years-old to Artemio Franchi. Having already a troubled character on Mutu, the Viola doesn’t seem interested in risking the team further more as they already have enough trouble in handling the Romanian international controversial actions.