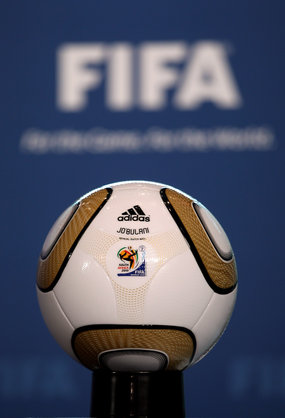 FIFA has reportedly widened their probe regarding vote selling by two FIFA officials last week. Amos Adamu of Nigeria and Reynald Temarii from Tahiti were both caught on video tape allegedly agreeing to sell their 2018 and 2022 World Cup votes for money in return from an undercover journalist posing as a lobbyist.

The story was broke by Britain’s Sunday Times newspaper and despite their denials both officials were immediately suspended from all football decisions and operations once the story hit news stands. Four former FIFA officials have also been mentioned in the same vein as the suspended ones and all six current or former officials were summoned to meet with the Code of Ethics group for their potential involvement in the illegal affair last week. The breaking news from the British paper has caused FIFA to admit that they will begin their own in depth investigation into the discovery and they have asked the newspaper to help out with the evidence they gathered to create the piece.

The international football governing body has supposedly asked the publication for all evidence involved in the case and the organization has announced that they will have “zero tolerance for any breach of Code of Ethics” that possibly took place. FIFA hopes to uncover any other incidents of vote selling from the organization’s officials for money or women recently or in the past and the organization hopes to clean up their negative image immediately before the World Cup decisions of 2018 and 2022 are publicly announced in the next year.

FIFA released the following statement regarding how they will attempt to improve their current state:

FIFA has immediately requested to receive all the documents and potential evidence that the newspaper has in relation to this matter, and will in any case analyze the material available. FIFA and the ethics committee are committed to have zero tolerance for any breach of the Code of Ethics and the Bid Registration. FIFA and the ethics committee are determined to protect the integrity of the 2018 and 2022 World Cup bidding process.