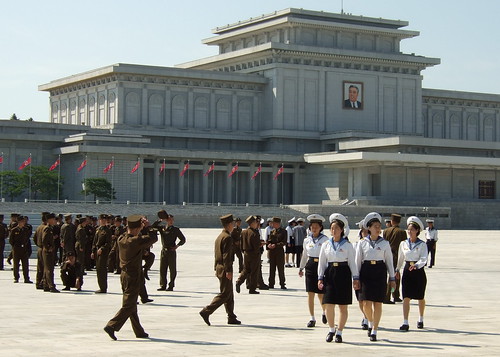 FIFA has begun an investigation into the alleged harsh punishments several North Korean players and their coach received following an early exit from this summers World Cup.

And North Korea had the unfortunate luck of playing in the Group of Death this summer along with three of the top ten ranked teams heading into the tournament: Brazil, Portugal, and the Ivory Coast. The squad lost all three of their matches and allowed the most goals of any team in the tournament this summer.

And it was rumored following the side’s first round exit that the club would receive some type of punishment for their poor form this summer and even dictator Kim Jong-Il admitted that it was a possibility heading into the Cup. The first news to break regarding this potential punishment was in a false report claiming the club was forced to work in coal mines following their return to their homeland. But this article was proven to be false and the picture in it depicting a player on the team in full mining gear was photo-shopped.

But once again a similar type of report arose claiming that the nation’s governing body held a secret assembly in which hundreds of officials, local journalists, and even young students attended and blasted their homeland’s national team footballers poor form along with their manager’s poor tactics. Apparently the assembly’s objective was to publicly humiliate the team in front of a large audience of angry participants and FIFA has claimed that the alleged comments made were considered ‘harsh ideological criticism’.

And to add onto the alleged bizarreness of the pending case apparently the North Korean governing body handed out even more severe punishments for their coach Kim Jong-hun then just a public, verbal stoning. Jong-hun was supposedly forced to perform hard labor on a construction site for his team’s disappointing results and despite the fact that the man is the youngest coach to ever manage his nation’s side into qualifying for the World Cup, he was allegedly ridiculed and physically punished by North Korea’s governing body.

And FIFA president Sepp Blatter recently announced that the organization and governing body for international football has issued the controversial nation a letter demanding an explanation for these ridiculous punishment tactics:

We sent a letter to the football federation to tell us about their election of a new president and to find out if the allegations made by the media that the coach and some players were condemned and punished are true. We are doing this as a first step and we will see how they answer.

And as Blatter said right now they are in the prelimenary stages of the case and FIFA is simply trying to feel out what North Korea’s response will be to the accused actions that the nation’s government officials may have committed. This story might take a long time to play out and it may have little affect on future World Cups considering North Korea had only qualified for one other in their history, but the true significance to the story is the fact that North Korea might be black balled from the World Cup for good if these accusations are in fact true and perhaps even other sports governing bodies like the Olympics would follow suite.

If an investigation proves to be conclusive then North Korea may receive severe repercussions for their involvement in future World Cups and possibly could be expelled from the event for good.