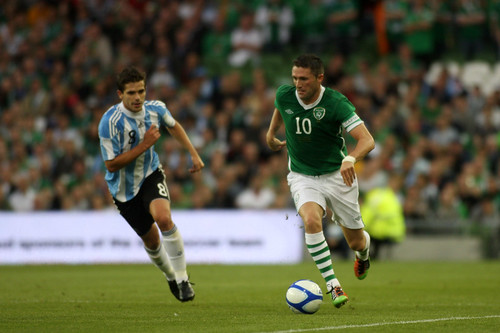 Having had tough seasons with Real Madrid, Fernando Gago finally starts to find himself some regular football with his current time in As Roma this season, giving him some joy back after previous disappointing time.

Enjoying his time in Rome, Gago is very keen on giving his best to impress the coach and Giallorossi’s management as the Argentinian international admitted that his footballing future depends a lot on how his doing at the Italian capital.

I was coming off the back of a difficult season at Real Madrid because of injury. [Roma director general] Franco Baldini then offered me this possibility and it seemed a good one. There is a new project here and the possibility to play football. I’m happy, this is a team for me, but my future depends on Roma,” Gago explained.

After trying to adapt with a new footballing culture along with different tactical approach given by Luis Enrique, Gago finally starting to earn the tactician’s trust in being one of the midfield warrior for Roma. This situation obviously something that the player is really hoping to keep until the last days of season especially since he is starting to enjoy the tactical approach given by Enrique, which focuses a lot on football possession, something which the midfielder is really good at.

He’s an excellent Coach. He has a lot of ideas. We work a lot on ball possession and I have faith. We just need time,” Gago added.

Arriving from Madrid on loan with the options for a permanent move to Roma in the end of season, it’s very normal that Gago is keen on adding his current nine Serie A appearances this season as returning to Spain might not be a wise choice at the moment. Although injuries have mostly been the Argentinian main issues during his time at Madrid, but the fact that the Spanish giant have a habit in purchasing new players each summer, the chance to play again at Jose Mourinho’s squad is obviously slim for the ex-Boca Juniors man.