Far From the Maddening Crowd 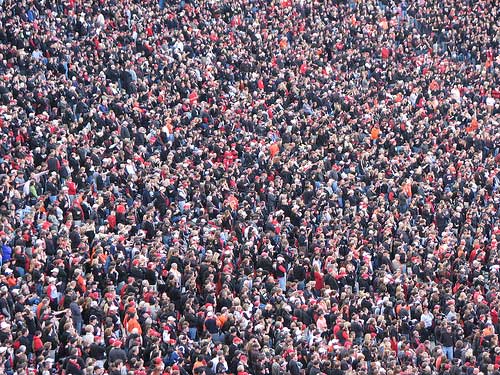 I don’t know what exactly is going on, but it seems every week that unruly fans are beginning to make as many headlines as star players.  Last week in Italy, firecrackers were set off during an AS Roma match and officials had to postpone the match for fifteen minutes as the smoke cleared.  A few weeks before that Cagliari was fined for racist chants during a match with Inter.  And at least once a month some footballer or coach is pegged in the face with a coin.

I suppose unruly behavoir and sports spectating go hand and hand, but at what costs?  It seems that many of these people believe that their involvement in these type of poor acts does not matter because they are a part of large numbers.  It seems that many supposed tough guys who commit these terrible acts would prefer to remain hidden in the masses.

Well one Yank doesn’t like this trend at all.

I understand that there will always be some bad apples ou there and there will always be some people that think paying for a ticket means they can act in any ridiculous way that they want, but pretty soon in places like Italy, spain, England, and even some venues here in the States they should think about pulling off the inevitable restriction to unruly fans…. don’t let them drink.

It wouldn’t be a fair rule for everyone that attends a game, but maybe that is the only way to curb the naughty crowd.  I can’t guarantee that it will expell all bad sportsmanship, but at least there will be a lot less cameras flung at star athletes.