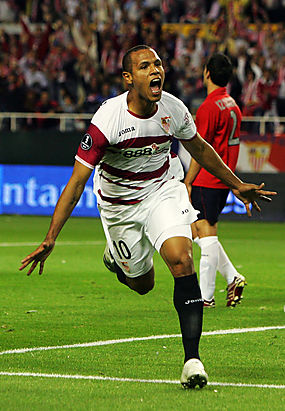 This news should not be considered too surprising considering Fabiano was often linked with a move to Tottenham this summer. The Brazilian admitted his interest in playing in the EPL, but remained loyal to his Sevilla side resigning this summer with the club.

But with only one start under his belt this season and a lot of frustrating time on the bench, Fabiano is wondering why he doesn’t see more minutes on the pitch:

I’m going through a tough period, but it isn’t the end of the world. I’m not thinking about leaving in January. I just want to play again.

January is a long way away. I don’t know what will happen… If things remained the same in January I would seek a solution. I want continuity. I don’t want to play one game and spend the next on the bench. I don’t understand something that isn’t good for Sevilla. It isn’t good for me either.

Fabiano’s agent Jose Fuentes stressed that Fabiano was resigned until 2013 and the player’s agent also told Punto Radio that he isn’t attempting to relocate the star anytime soon:

I have never said that I was having negotiations for making Luis Fabiano leave Sevilla. It’s not true that we are thinking in the winter market and nothing like that. He has renewed his contract until 2013 so it’s stupid to think at this point that he is going to be transferred. These rumours make people think that we don’t know how to represent our players and it’s a negative rumour for Luis Fabiano.

I am convinced that Luis is going to be a regular player for his team again. It’s normal that he doesn’t like to be on the bench, no player likes to be a substitute, they all like to play. He has to make an effort for not being on the bench, it depends on him. He doesn’t have any problem with anyone. The coach has taken his decision and Luis accepts it, besides that maybe he doesn’t agree with that decision.