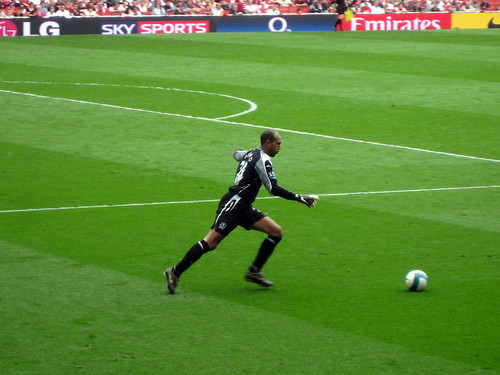 Everton scored twice in the opening 19 minutes in completing a 2-1 away victory that wrecked Manchester City’s hopes of claiming top spot in the Premier League.

Early goals from Tim Cahill and Leighton Baines put the visitors 2-0 ahead seemed to put Everton well on the road to three points. But then Victor Anichebe was sent off on 60 minutes for a second yellow card after he had felled Pablo Zabelata and City threw everything at Everton.

City’s incessant pressure finally paid off when Phil Jagielka netted an own goal on 72 minutes, but Everton’s 10 men bravely held out.

Everton got off to a great start when Anichebe just failed to convert a Baines cross, but Seamus Coleman dinked a lovely little ball onto the head of Cahill, who had an easy task to nod under the exposed home goalkeeper Joe Hart.

City should have levelled on 10 minutes when Yaya Toure picked out David Silva. The Spanish forward was unmarked in the area, but was wasteful as he thrashed a shot into the side of the net.

City paid dearly for that miss as Everton went two up within 18 minutes. Cahill played a cushioned pass to Baines and he slipped a swerving shot beyond the despairing dive of Hart from inside the area.

City did not create much until Anichebe was sent off, but after that it was one way traffic towards Tim Howard in the Everton goal.

City managed to pull a goal back when Yayo Toure’s shot went in via a deflection off Jagielka. But that was all they got past Howard who was simply magnificent making a series of outstanding saves to time and time again deny City. In all City managed 25 shots against Everton, but could only get the one deflected shot past Howard.

With the win Everton move up to 14th, while Man City missed the chance to go top over Christmas for the first time since 1929.