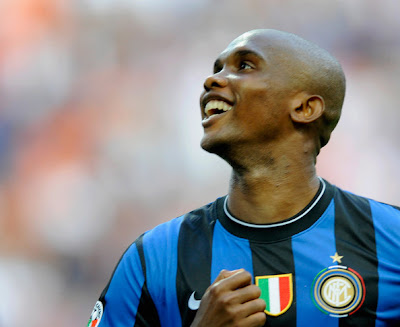 Inter forward Samuel Eto’o has been suspended for three matches for head butting Chievo Verona defender Bostjan Cesar during last weekend’s 1-0 defeat of the defending champs.  Eto’o wasn’t punished for the incident on the pitch, but following video replay the Cameroon national team man will miss three matches and also received a $40,000 dollar fine for his actions.

Inter head coach Rafa Benitez came to his star’s defense following the match claiming that Eto’o only acted out of line because he was provoked, but apparently the league felt his reaction was too harsh. Cesar gave Eto’o a weak slap in the face prior to the incident, but Eto’o imitated Zidane and gave the defender a diving head butt to the chest during the loss. Eto’o missing from action will likely have negative consequences for a side that has lacked another consistent goal scorer this season.

Eto’o has been one of the few Inter players with multiple goals this season and the current 6th place squad will forced to move on this late November/early December without the man that has scored 18 collective goals for the club so far this year. The decision to suspend Eto’o could be the beginning of the end for Rafa’s debut season, but somebody on the squad will have to step up over this three game stretch now that the former Barcelona man is officially ruled out.

Inter has only scored one goal this November, so the time has come for somebody else to step forward and will the needy team to victories.