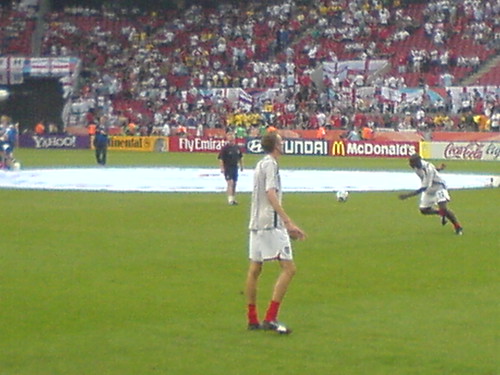 England went into a warmup for the World Cup against Mexico without David Beckham and wondering if Darren Bent would be able to make the squad.  Well, even though there are all kinds of injuries and little problems the English still managed a 3-1 win over the Mexicans.  To me, this is a good victory because we know that the Mexicans can play and England is still searching for the right formula to make South Africa 2010 work.

At this point Fabio Capello is doing the right thing–giving credit to players who played well and keeping his plans to himself.  He’s got alot to deal with and he can’t reveal his hand this soon–maybe never at all:

“Gerrard can play in midfield with Frank Lampard but we have to wait and see which players will be fit.”

“I changed it after half-time and put Steven in the middle, where he played very well. He is a really good player and can play in midfield, as a number 10, in lots of different positions.

“I am not concerned [with the performance]. It was really important to know where we are now, physically and mentally after a long season. We have time to recover a lot of the spirit of the team and the qualities we have.

“When we play counter-attacking, we are really dangerous. But I don’t just want to play on the counter. I want more.”

The best part is that he’s making changes for injuries, but we don’t know what the plan is–we just know he made the changes.  This means he can continue to tweak and not give anything away.

Do I think the plan will work?  I don’t know.  At this point everything is still pretty fresh.  Yes, the World Cup is coming up fast, but it’s a monthlong tournament and we’ve got a couple weeks before it start.  If England were to make a deep run we wouldn’t “get it” until it was all said and done.