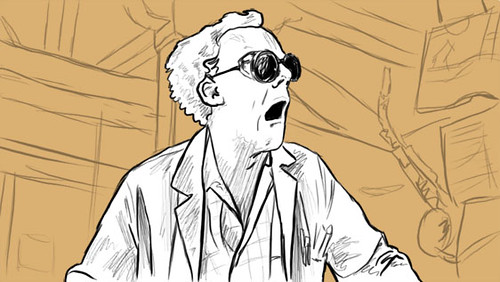 I am back again, from the future! This time I have been to the end of the 2010 MLS Season and I would love to let you know who won all of the individual awards and accolades. Oh, and I’d also love to tell you about which teams hoisted the historical hardware and secured significant squad honors. I encourage you to bet on these, because you know Biff will. What do you mean you want to know how Lost ends, Marty. Jesus Christ, I’m giving you gold here!

Marty, sorry I lost my temper, I had a run-in with Ted Danson and Mary Steenburgen at a restaurant, mistook her for my bride of the nineteenth century, and perhaps made a few advances that are now being characterized as “too forward” and “rapist like”. So, it’s been a long day. Anyways, if my calculations are correct, the MVP this year will be L. Donovan. The Coach of the Year will be Preki. The Best Goalkeeper will be Pat Onstad. Yes, he’s Canadian, Marty.

But who do I like to win it all, Marty? Well, if someone will take your “futures” bet, I would wager everything I have on the fact that the LA Galaxy will win the big “Enchantment Under the Sea” dance this year, which I am told is going to be done in the theme of the MLS Cup. Yes, Marty, the Galaxy, the team with two stars on it. I know, Marty, it’s ironic. I don’t need you to tell me that it is ironic. Why will they win it all, Marty? That’s an easy one to answer.

It’s because Bruce Arena is a brilliant coach, and he will get the most out of his players. Plus, he has a couple of bona fide superstars on his team. And hey, if you are going to build a team into an MLS Cup Champion, why not do it with some style, right? I think he will get LA the Cup, but I like the Crew to win a third straight Supporters Shield. I can’t bet against the “beards”, Marty. I also like the Sounders to win the US Open Cup. Wait! Did you hear that Marty?

It’s those damn Libyan terrorists again! Let’s go where we don’t need roads or permission to steal Libyans’ plutonium, Marty! I’m talking about the future, 2080. By then, MLS will have been co-opted by the real MLS, the realtors, Marty. They will make the teams play for real estate a la that movie Robot Jox where (in the not-so-distant dystopian future, of course) countries fought over land with giant goaddamn robots instead of having wars!

Never seen that one, Marty?

Well, in that case, fuck 2080. Marty, we’re going to the premiere of that movie on November 21, 1990. Before we go though, quickly call in your bets. Oh, it’s OK, those Libyans’ van appears to be running low on gas. They stopped at the Shell across the street. We have a little more time. Einstein, what do you mean you don’t want to see the premiere of Robot Jox again, are you insane? Perhaps brilliant too, yes. But insane, for sure. OK, now we need to go.