Diego Maradona is no longer the Argentina manager 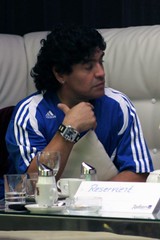 Diego Maradona is no longer the manager of Argentina. The AFA, Argentinian Football Association, has decided not to offer Diego Maradona a new contract. Diego Maradona has been in charge of the Argentina national football team since November 2008, appointed when qualification for the 2010 World Cup appeared in doubt. Maradona did manage to achieve qualification, thanks to some last minute crucial goals, and Argentina started the tournament finals in great form, winning their first four matches.

Unfortunately for Argentina the national team fared badly against Germany, losing 4-0, in the quarter finals and from that moment on speculation has focused on Maradona and his support coaching staff. Initially it appeared that Diego Maradona was going to step down but the official resignation never arrived. Word then started to spread that Maradona wanted to stay and the AFA were willing for him to continue, with certain board members even commenting admirably on the job he had performed. In the last couple of days, however, the situation had changed again and it appeared Diego Maradona was only willing to stay with the proviso that his entire staff could do, whereas the AFA were unwilling to keep particular members of his back room team. Diego Maradona seemingly remained insistent but so too did the AFA and in the end the two have parted company.

In terms of public relations and politics the AFA could not have ended this better. Had the AFA sacked Diego Maradona they would have angered a large part of the Argentinian public, who adore Diego Maradona for what he achieved for the albiceleste as a player, yet had they ceded to all his demands they would have appeared powerless and subsequently angered another faction of the Argentinian public. As things have turned out the AFA have appeased both camps in some respect and the conclusion appears to have been reached because of Maradona’s obstinacy rather than their own slow deliberations. Julio Grandona, the AFA President, suggested a four year offer had been on the table for Diego Maradona to accept if he were willing to negotiate the release of some of his staff, in particular defensive coach and former Argentina player Oscar Ruggeri. Diego Maradona was unwilling to compromise and now Argentina are looking for a new coach.Oscar Ruggeri played with Diego Maradona in the 1986 World Cup winning Argentina team.

The current Argentina under 20 football team coach Sergio Batista has been appointed manager on an interim basis with a view to appointing a permanent manager after the friendly against Ireland in August. The most popular choice for the position at the moment appears to be Marcelo Bielsa, currently manager of Chile, who has been in charge of the Argentina national team before.