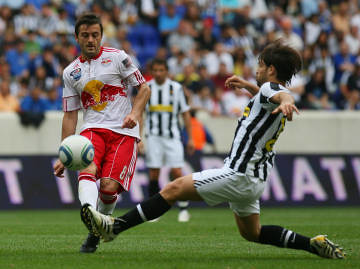 After having an unclear and complicated future, finally Diego Ribas ended his courtship with Juventus and officially went to Wolfsburg earlier this week.

Despite feeling relief that everything has already being clear up, the former Werder Bremen star still has something to say for the Bianconeri’s management that decided to sell him.

Speaking at the press conference, Diego explained that he never wanted to leave Juventus and felt sorry for the fans that still supported him despite his poor first season with the Bianconeri.

Although he wasn’t totally upset for leaving, the Brazilian player doesn’t like the fact that the management seemed to disrespected him as they never told him about anything at first about his selling.

I wasn’t the one to leave. It was Juve who kicked me out, “ Diego said. “Juventus were not clear. It was not the club who told me of the sale, but FIFA agent Giacomo Petralito, so only afterwards did I talk to director general Beppe Marotta. I expected more respect.”

The Playmaker also stated that his selling was also something that Juventus’ coach, Luigi Del Neri, approved as Diego knew that the coach wanted him to stay at Turin. His future did become uncertain as despite Juventus’ management will to sell him, Del Neri’s affection towards the Brazilian international has made the Bianconeri’s board considered to keep him for a while.

Del Neri was always very clear with me and wanted me to stay. It seems as if none of the people who run the club listened to him and I never understood why they went against his wishes.” Diego added.

The playmaker’s departure will surely raise many questions for Juventus’ management as from the previous pre-season and Europa league matches, the Brazilian has always step up as the team’s source of creativity. It would be interesting in figuring out what does the team have in plan for the Bianconeri considering the fact that the coach himself never wanted to loose the 26-years-old player.

Currently the board have already signed Fabio Quagliarela right after they sell Diego and reports also stated that the Turin based club are still interested in signing few new players to strengthen their squad. However, it seems that the management won’t be searching for another creative player and rest their hope to one of their new signings, Alberto Aquilani.