De Sanctis Ordered Napoli to Mantain Concentration in Serie A 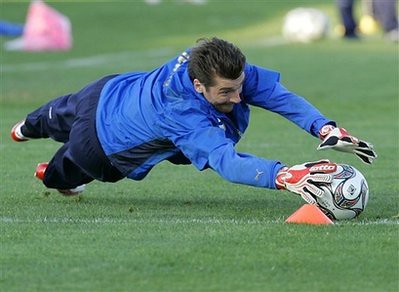 Finishing 3rd in the Serie A last season and already spend quality additions in the summer puts Napoli among one of this year’s Scudetto candidates, however, their spit focus in the Champions League apparently takes their tool in the league.

In order to get their act together in the league, the Partenopei’s keeper, Morgan De Sanctis, ordered more concentration from his teammates especially if the still want to compete in the domestic title race.

“It is clear that there has been difficulty in balancing between two competitions at the start of the season, it is not easy,” De Sanctis revealed. “But since we have already stumbled upon some unfavourable situations, we are preparing mentally and do not want to make any more mistakes.”

De Sanctis along with his team has just arrived from a tough European battle against Manchester City in the midweek and they must be ready to face Atalanta at Bergamo in the weekend, a difficult game indeed considering the energy level that the Partenopei have been putting in Europe. Just like the keeper said, if the Naples based outfit are eying for three points this weekend, they must also give their focus as they could easily lose more points if they’re not careful.

“Bergamo is a difficult trip because Atalanta are a terrific team. We must hold a high level of concentration because they are a great team,” De Sanctis added.

Being entered in a difficult group in the Champions League obviously took the tool out of Napoli’s players as they usually picked up disappointing result in Serie A especially when facing mid-bottom table teams. That situation obviously isn’t healthy for Walter Mazzarri’s team, as although they have a great chance to reach the second round of the top European club competition, losing more ground in Serie A could be bad for them in the long run.