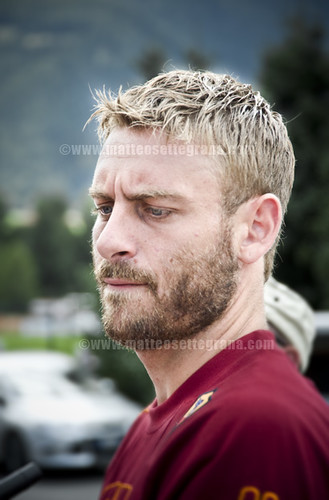 The final verdict regarding Daniele De Rossi’s future still remains in the balance after the midfielder revealed that negotiation for his contract extension with As Roma is yet to find any kind of agreement at the moment and isn’t closing the opportunity to leave on a free transfer.

De Rossi stated that the contract matters should actually be resolved earlier as at the moment there hasn’t seem to be any sort of agreement met by both parties, although the Italian international promised that he will worked out the best solution for him and Roma.

“Could I leave on a Bosman? It depends on the contract and if we reach an agreement. I have never put pressure on Roma and I never will as that would affect my relationship with the club. Things have stalled right now and we are studying the matter, but we’ll certainly find a solution, in one way or another, that suits everyone,” De Rossi said.

Moreover, De Rossi also revealed his interest in playing abroad but apparently not anytime soon as the Italian international would like to stay in Italy for at least five more years before thinking about football outside of Serie A. The capital club vice captain also stated that he still can’t see him playing in another Italian team outside of Roma, although he didn’t really shut down that idea, especially should his contract extension process with the Giallorossi’s management does hit a brick wall.

I want to play in Italy for five more years, then I would consider playing my football outside of the peninsula,” he added. I’m attracted by the idea of playing abroad. I’m thinking of Japan, China, America, it would be a good life experience,” De Rossi added. “Another Italian club? I can’t imagine that because I have always played for Roma”

For now, the chance in seeing De Rossi wearing another jersey outside of his Giallorossi shirt seems a bit far fetched as although the negotiation process hasn’t really going on well but that’s could just be a strategy in getting the best kind of deal from both parties. However, should things didn’t reach any conclusion from January onwards, than there’s obviously a big chance that the Italian international midfielder might eventually ends his adventure with Roma.

De Rossi’s contract is set to expire in the summer of 2012, at the moment Roma are working hard on making the vice captain signs a contract extension, but reports from Italy suggested that both parties still can’t conclude an agreement regarding the wages. The Italian international is rumored to ask a pretty huge wage around 6 million per/season, while the capital club are obviously looking to bring down the demands as much as they could since the Giallorossi have already set up a fixed wages structure for the squad.