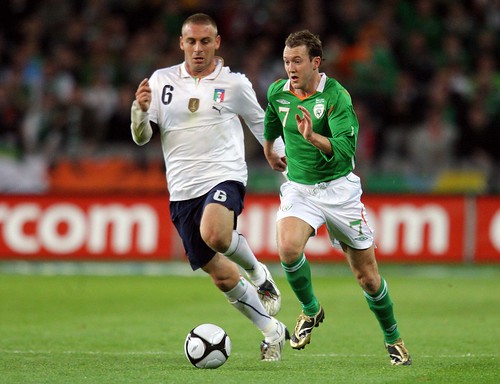 Being a vice captain at As Roma and also considered the club’s current legend after Francesco Totti, doesn’t make Daniele De Rossi gave up easily in negotiating his contract renewal with the capital side as the player himself revealed that he wants adequate offer if Roma’s management are serious in keeping him.

De Rossi stated to the press that the current on-going negotiation process is a normal thing to happen as adjustment in both parties request is yet to meet an agreement and the Italian international added that he isn’t willing to sign a blank contract to remain at the club.

“My contract will be discussed along with the club. We’re battling over it and negotiating. Obviously I would like to earn a little more, while the club wants to spend less. It’s only normal and happens at every club. Am I ready to sign a blank contract to stay at Roma? No,” De Rossi stated.

The Roma’s vice captain statement obviously rises the concern from the club’s fans there’s a huge possibility that De Rossi might be leaving the club for free in the summer of 2012 or even next January if no agreement reached between the club and player. With many big clubs such as Ac Milan, Chelsea and Manchester City showing interest on acquiring the Italian international, the Giallorossi’s management obviously need to make a fanst progress in the negotiation or they might as well sell the player in January if the capital club aren’t willing to lose De Rossi for free.

Roma’s director, Walter Sabatini himself is actually worried about the club’s chance in keeping De Rossi since the negotiation does take quite a while, but Sabatini remains confident that in the end the vice captain won’t be leaving the capital and remain at the club. However, the ex-Palermo director warned the fans that should things didn’t goes well than Romanisti must be willing to let the Italian international go as that’s probably what the player wants.

“Daniele’s contract does worry me, though I think it can be resolved, as he strongly wants to stay here. It’s only right he looks at the market rate and makes his requests,” Sabatini stated. “We are discussing it in a very constructive way. The club has thought of a fairly innovative type of contract. It would be a huge loss if he did leave, and Roma must be ready to accept that, but I don’t think it will come to that.

Despite being known as a loyal player, there are rumors suggesting that De Rossi might actually be considering his future career as he is looking to see whether the capital club’s new project under Luis Enrique can lead into something promising. The Italian international has been receiving his shares of critics lately since his performance seeming stalled especially last season where he had many disciplinary issues which caused him a suspension from the Italian national team coach, Cesare Prandelli, who can’t except the 28-years-old attitude on some games with Roma.