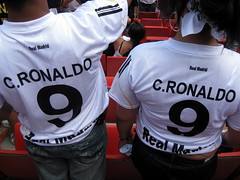 Portugal and Real Madrid star Cristiano Ronaldo shocked the world yesterday when he announced via his twitter and facebook pages that he has become a father. Ronaldo’s management  have also confirmed the news this morning.

A direct quote from everyone’s favourite chronically over-tanned midfielder: “It is with great joy and emotion that I inform I have recently become father to a baby boy. As agreed with the baby’s mother, who prefers to have her identity kept confidential, my son will be under my exclusive guardianship. No further information will be provided on this subject and I request everyone to fully respect my right to privacy (and that of the child) at least on issues as personal as these are.”

And par the course the tabloids have already started speculating about who the baby-mama is. Portuguese newspaper, Correio da Manha, has taken the lead so far in reporting that the mother is an American woman whom he met while abroad. Cristiano allegedly knocked her up when he was on vacation in Los Angeles during the summer of his transfer from Man United to Real Madrid. Small glitch to this story however: the baby is rumoured to have been born in June which means that the child must have been conceived not while in LA on vacation but later. Looks to me like we can buckle our seatbelts and get ready for a summer filled with some good ol’ Cristiano sex scandal rumours.

As Ronaldo has quite peculiarly been given exclusive guardianship of the child (which I think is a news story in and of itself), his sisters and mother Dolores are in the process of obtaining the appropriate documentation required to have the newest member of the Ronaldo family brought over to Europe permanently.