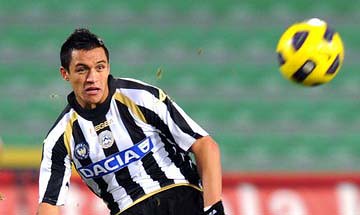 The future of Udinese’s Chilean star, Alexis Sanchez still hangs in the balance as despite recent strong indication that the player will ends up in Barcelona, things seems a little bit confusing as the Bianconeri’s president, Giampaolo Pozzo, still denies that a deal have been struck with the Catalan.

Squashing the recent media rumors stating that this weekend will be the day that Sanchez sealed the deal with Barcelona, Pozzo insisted that there’s no agreement yet regarding the Chilean international fee with anyone including Pep Guardiola’s team.

This soap opera is disappointing, but Sanchez is still an Udinese player. I am curious to see what he would do alongside Lionel Messi at Barcelona, but deals are only completed when there is a signature. Up until this point, the right financial offer hasn’t arrived, not even from Barcelona, so we are quite some way off a sale,” Pozzo stated.

This statement arrives pretty much right after rumors spreading all over the net that Sanchez will be heading to Barcelona in a 40 million Euro worth deal, although the transfer money payed would only be around 28 million Euro with addition 12 million as bonus. However, with Pozzo’s latest statement, this deal might not really be true as there’s a possibility that the Friulani would like to get something more than that amount as the president have also revealed that he’d liked a player as an addition to the deal.

Moreover, Pozzo also stated that should there’s no adequate offer than keeping Sanchez for another season might also be something that Udinese will finally do considering there’s a Champions League football that they’ll be facing in the new season. However, the patron do believe that holding on to the Chilean would be the last possible move at the moment, considering that there’s host of big clubs are eying the winger and offering the player wages that the Bianconeri wouldn’t be able to coup.

“Our finances are in good shape, so we are under no obligation to sell him and we are willing to accept players in part exchange. If the right offer is not made then the boy will stay at Udinese and that will be the best outcome for us,” Pozzo added. “We wanted to keep him for another year in order to honour the Champions League, but we are not Barcelona, Manchester or Inter. When the big clubs fix their eyes on our players then we can’t do anything but hope they pay the right price.

With clubs like Manchester City, Man United and even Inter Milan are still hopeful for the Chilean signature, the deal could still turn into an exciting twist in the upcoming days as until the deal been confirmed, nothing can be considered certain for Sanchez’s future.