Chinese Keeper Refers To Fans As “A Bunch OF Dogs” 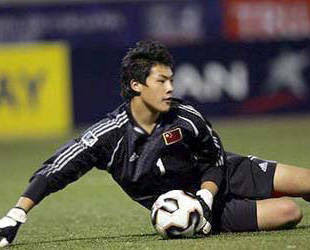 Chinese football has been heading in a downwards spiral for sometime. Corruption in the league office, dismal football and fixed matches being showcased on the pitch, and bribery and scandal has embedded itself in the Chinese culture of the sport. The domestic league was recently proven to be fraudulent and many journalist from the country have recently admitted their embarrassment of what the sport has become in the nation.

And this week one Twitter type of incident may have topped all of these former embarrassments. 21-year-old national team goalkeeper Wang Dalei posted several hateful remarks directed at the country’s fans on his microblog after Monday’s 3-0 loss to Japan. Dalei played poorly in the match and easily allowed one of the goal’s when he batted an incoming cross directly to the foot of an opposing striker. The heavily tattooed keeper instantly became an infamous Twitter villain following the match when he posted one blog referring to his nation’s fans as a “bunch of dogs.”

It would be flattery to call you fans. You’re just a bunch of dogs. You bunch of morons are the main reason why Chinese football can’t make progress. You throw in stones after a man has fallen into a well.

Wang, having already called his fan base “a bunch of dogs” then proceeded to leave this rap style lyric down on his next microblog posting:

Now you guys come out and try to make peace, but your IQ is way below the range.

And to make the story that much more hilarious, Wang faced reporters on Tuesday and told them regarding the strange posts that he “really didn’t care about this thing” and also claimed his own innocent role in the incident by presenting that he “didn’t really say any dirty words.” Wang then proceeded to issue a third blast later on Tuesday. You would think by now that his coach would have made him remove his site or quit posting on it, but Wang decided to leave this remark directed at reporters who had criticized his previous Tweets:

I heard there’s more than 7,000 football journalists in China, and I estimate at least 4,000 of them hate football. I’m not Spiderman. When opponents score, I’m a moron, when I make a save, I’m still a moron. I wonder if you guys are stressed out at work and taking it out on me.

Needless to say, Wang has been suspended from the national team indefinitely. The keeper, who botched the goal in the first place, basically forced his own suspension by continuing to write ridiculous things on his microblog directed at his own fans and critics. It is one of the strangest ways a footballer can be suspended and yet another example of the power of modern day technology and the impact it can leave on the sports we love to watch.

It also proves that any idiot in the world can learn how to write a microblog, but I’m sure if you are a regular reader of my material on this site then you’ve already found that out.