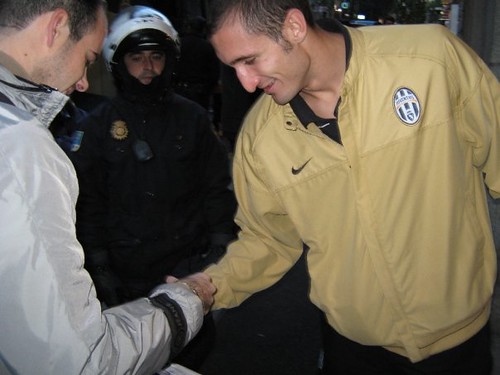 Juventus’ defender, Giorgio Chiellini, finally ends all the previous speculation regarding his future as the Italian international has officially penned a new deal with his club which will keep him in Turin until 2015.

The deal that reportedly was done on Tuesday evening has finally resolved the wages issues that supposedly become the hurdle in both parties talks earlier this season, according to the media in Italy, the former Fiorentina player will receive 3,5 Million Euro per season.

The news of Chiellini’s extension surely provide a sight of relief for Juventus’ management and mostly fans as they were in danger of loosing one of their important players in defense, should the Bianconeri failed to extend the contract. The Italian international himself was rumored to be wanted by host of clubs last summer including some big clubs such as Manchester United and also Real Madrid, however the new contract should keep the center back at the Bianconeri for few more years.

Chiellini himself has pretty much been touted as one the best new generation of Italian defender after the likes of Alessandro Nesta, Fabio Cannavaro and Paolo Maldini although he hasn’t yet reached the level of those three legendary defenders as just yet. However, with his strength and bravery the 26-years-old could still improve to be a much more quality player in the future, which pretty much become one of the reasons Juve are determined to keep him.

Having plenty new signings at the back this season, such as Leonardo Bonucci, Marco Motta, and others who are relatively young players, makes Chiellini’s role more essential for the Bianconeri this season. With Fabio Cannavaro already deciding to end his career with Juve and went to middle east, the leading role at the Turin giant’s defense is solely being bestowed on the former Fiorentina player.