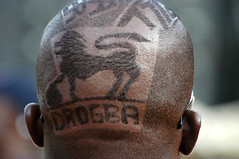 Chelsea completed the FA Cup and EPL double with a 1-0 win over Portsmouth in Portsmouth’s last hurrah before relegation.  With the EPL season over and nothing to lose one would have thought that Portsmouth might have come out pretty loose and given Chelsea a hard time and they did.  Only allowing Didier Drogba the double-clenching goal in the 1st half.

What does this mean for the future of the EPL?  Well, it means that United is really pissed.  They already gave Chelsea the regular season title and now they had to watch the blues win the FA Cup.  It kind of makes that epic final from last year seem like a distant memory–doesn’t it?

Does this mean that Chelsea can start a run like United had the past few years?  Yes, it does.  They’ll have to contend with United for the top spot again next year and we can be assured that Arsenal is ready to spend to bring themselves closer to the title AND Tottenham is planning on doing more than just going to the Champs League and settling.

However, Chelsea has all the momentum.  They recovered from a horrible final loss last year that everyone on the planet saw to come back this season and be only the 7th team to complete the double.

In short, it means they handle adversity better than their rivals.  They have no problem bucking up and pulling their bootstraps up so they can make something work.  They showed that when their manager didn’t need to run constantly to the media–something that works–and they STILL finished the double in his first season at the helm.

Hopefully the World Cup isn’t too much of a drain because next season could be a wild ride in England with so many teams gunning for the top and every one of them ready to spend.  WOW!