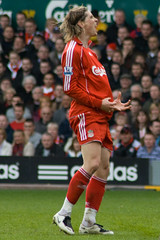 It looks like the race to sign Liverpool’s Fernando Torres just got a little more serious. A lot more serious, actually — we’re talking league record transfer type of serious. ESPN Soccernet is reporting today that Chelsea have entered a verbal bid for Torres worth £50 million. According to their source, Man City have also put in a verbal bid that’s worth £25 million more than Chelsea’s for the striker. An inside source tells ESPN Soccernet: “Liverpool would naturally want the bigger sum, but Torres has made it perfectly clear that he won’t be joining Manchester City, even though City would go as high as £200,000-a-week wages.”

You can’t really blame Torres for wanting a move to Chelsea regardless of what City are willing to pay him. With Chelsea coming off of a remarkable season, the choice for a striker in his prime is likely to be pretty straightforward. Torres’ decision will be undoubtedly guided by where he thinks he will have the support to win the most silverware. Period. However, as Robinho will surely leave City’s books this summer, and with an owner who’s got gobs of money to shell out, it will be interesting to see who Man City manage to bag before the summer is through, even if that isn’t Torres. In the height of transfer season, big names have already been linked to City: Barelona defender Dani Alves, Roma’s Phillipe Mexes and Germany’s emerging World Cup star Mesut Ozil, to name a few.

In addition to looking keen on Torres, Chelsea are also set to sign Torres’ Liverpool teammate, Yossi Benayoun this summer in a £5.5million dollar deal, according the Mirror. This has to leave Liverpool fans wondering: if Chelsea is successful in their pursuit of Torres as well as Benayoun, what sort of firepower does that leave Liverpool going into next season? Aside from the obvious managerial shift, major changes look afoot at Liverpool this summer indeed.