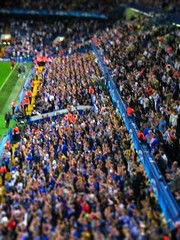 Where did Chelsea lose the plot? Things were fine up until last week when the Blues seemed to have been unstoppable. They were on course for a quarter final berth in the Champions League and they were also sitting pretty on top of the EPL standings. How things change.

Chelsea now lie 3rd in the league and rumours have it that Abramovich will sack Ancelotti if he fails to bring the Premiership title to Stamford Bridge. However, i  do not fully blame Ancelotti. With all the off pitch misdemeanors his players are involved in, it is not hard to place your finger on the root cause of the clubs real problems.

This opens the possibility of Mourinho returning to England to the club he left on bitter terms. Mourinho has never truly been happy in Inter and the number of statements he has made to that effect speak volumes. I wonder if Abramovich will be man enough to say that he was wrong in sacking Mourinho  and re-unite the Portuguese with old pals Drogba and Lampard.

That said, all is not lost for the Blues. Although they are trailing leaders Manchester United by four points, Chelsea have played a game less. Their April 3 tie at Old Trafford will probably settle who between the two walk away with the title and you can bet that it will be played like a final.