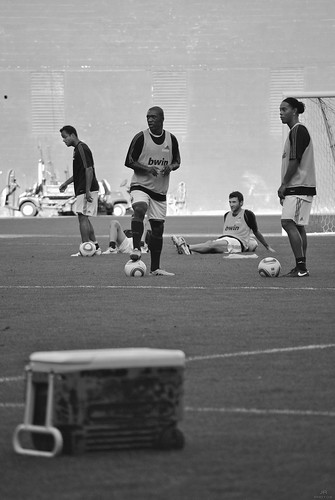 The defeat that Ac Milan suffered against Real Madrid in the Champions League group stage left a wound for the Rossoneri’s coach especially with the unbalanced play and attitude from his players.

The coach’s disappointment about that performance reportedly will resulted in Allegri’s decision to reduce the numbers of attacking players in the starting line up and also changed the approach of the team to a more balanced one.

According to La Gazetta delo Sport, Allegri was gutted by his players’ attitude who played like a friendly game instead of an important Champions League clash. This disappointment reportedly will resulted in changing some of his regular starting line up, notably not playing all four of Seedorf, Pato, Ibrahimovic and Ronaldinho at the same time as they failed to impose themselves against Madrid’s players on Tuesday.

This idea actually has been considered by Allegri for a while, however seeing the improvement the those four offensive minded players’ performance in previous matches, the former Cagliari coach seems eager to keep trying it out. However, the coach looks to finally decide that getting the balance is much more necessary for Milan in the next games especially when they are facing strong and fast teams like the Galacticos.

In order to keep the balance it looks like one of Seedorf or Ronaldinho might eventually be sacrificed by Allegri in order to give more dynamism and pace in Milan’s playing especially in the midfield. Reports from Italy suggested that Kevin Prince Boateng and also Mathieu Flamini who have been used as substitutes lately are being seriously prepared by Allegri and at least one of them might see the from the start in the next game against Napoli.

There have actually been lots of questions about Allegri’s decision to field in too many offensive minded players and keeping all of the veteran starting in Milan’s first line up. However, it’s seems that the coach are trying to make an experiment in seeing whether his team can play with four attacking players in the future by using another attacking midfielder as part of Pato-Ibra-Ronaldinho trio. Now seeing that it pretty much imbalanced the team, the tactician is simply looking to act more conservative in the next upcoming matches.

It will definitely be interesting to see whether that speculation is being executed by Allegri in Milan’s next match, seeing from the trend that the coach been doing recently it looks like that it might happen indeed. The former Cagliari coach is clearly still experimenting things at the moment, however he is not shy to change things or personnels in the first team should he felt disappointed with something. So next Monday at San Paolo, we might see a different Rossoneri that have more balance and grit compared to the one we’re seeing at Bernebau.