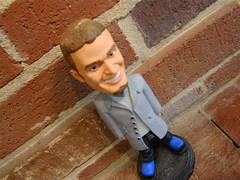 Jose Mourinho and Louis Van Gaal will field Inter Milan and Bayern Munich for the Champion’s League final after Inter beat Barca on aggregate scoring to advance to the final.

My theory of “machismo” impacting Soccer players’ performance is coming more and more to fruition everyday and now we have two big talkers in the final ready to fire words at one another through the media practically everyday between now and the final.

I anticipate that this will be a battle that involves each coach trying to psyche out the other AND trying to motivate his team at the same time.  How that will happen?  I don’t know.

I’m sure Louis Van Gaal will start railing on Lyon after his Bayern club beat them despite the French FA’s attempted–as he would like it–fixing of the schedule so that Lyon would be more rested and ready for Bayern.

I fully anticipate Mourinho leaking multiple stories about his possible employment with other clubs so he can not only keep himself relevant, but so that he can keep his team on their toes.  Every time they hear the rumors they’ll want to work that much harder to keep him in Italy.

I imagine Van Gaal will complain like nobody else about the Ribery suspension due to a red card that he will probably find “disgraceful” or “objectionable” or something like that.  Anything at this point to rally the troops since he has to do everything he can with a star player missing for the final.

Since each team has a history and the Germans and Italians have a history this should be funny to walk and hear.  The pontificating coming from the mouths of these coaches will likely be premium comedy for the coming days until we decide the winner on the field at Bernabeu.