Champion’s Leagues Matches To Go On As Planned 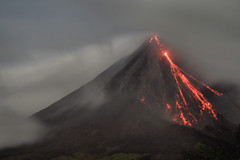 With volcanic ash still spewing from the volcano in Iceland the skies over Europe are still cloudy, but airlines have run test flights and found no damage to their planes’ engines.  This coupled with the ability to travel by train and ferry in Europe has caused UEFA to allow the matches in the Champion’s League on Tuesday and Thursday to go on as scheduled.

They are also trying to figure out what to do in the Europa League as they said in a statement:

“A decision will be taken in the coming days about Thursday’s two UEFA Europa League matches: Club Atletico de Madrid v Liverpool FC and Hamburger SV v Fulham FC, as well as for the UEFA Futsal Cup finals in Lisbon from Friday. However, Sunday’s UEFA Women’s Champions League semi-final between Umea IK and Lyon in Sweden was postponed as the French side were unable to travel.”

This year’s Champion’s League might go down as the “volcano championships” when it’s all said and done.  Plus, it’s interesting that we have the ability to do this travel in the 21st century so even a volcano that cancelled tens of thousands of flights can’t stop international soccer.

Now, as to the effect it has on the teams I think that will be minimal.  There’s no reason in the world to think that the teams can’t handle a little travel diversion.  Sure, it’s annoying, but this didn’t happen suddenly RIGHT before a match.  The clubs have had a couple days to figure out what to do.

This means the players should have been smart enough to get more rest and get themselves prepared to play under these circumstances.

I applaud UEFA and the individual clubs for getting it together and making sure that this Championship can go on as planned.  This is an impressive move by a sporting body–one you don’t see that often in the world of sports.