Lionel Messi made headlines once again as he scored a club record 15th Liga hat-trick for Barcelona in a thrilling 5-4 win against Deportivo La Coruña. Meanwhile, Chelsea shone in England, Paris Saint-Germain went top in France and Bayern Munich set a Bundesliga record.

Spain
Lionel Messi is almost a one-man team as his 21st hat-trick for the club gave Barca a sensational 5-4 win at Deportivo La Coruña on Saturday night. The win, and three points, keeps Barcelona level on points at the top of La Liga with Atlético Madrid, whose last-minute free-kick from Falcao allowed them to beat Real Sociedad 1-0. Elsewhere, Real Madrid continue to climb the standings, as goals from Gonzalo Higuaín and Cristiano Ronaldo gave them a comfortbale 2-0 win against Celta Vigo.  Read more... (452 words, 1 image, estimated 1:48 mins reading time) 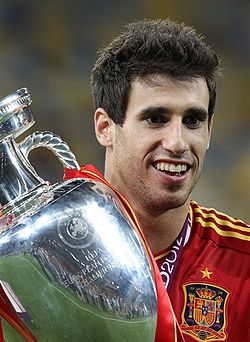 The 23-year-old Martinez signed for Bilbao from fellow La Liga side CA Osasuna for €6 million in the summer of 2006. He quickly established himself in the side and played 35 matches for his club in his debut season, scoring three times.  Read more... (265 words, 1 image, estimated 1:04 mins reading time)

Mario Balotelli, Gigi Buffon and Andrea Pirlo are in the running to win UEFA’s Best Player in Europe award.

A 32-man long-list has been drawn up by selected journalists across each UEFA member country and Italy’s three Euro 2012 stars were included.

Buffon and Pirlo were two of Serie A’s three representatives after their fine form for Juventus over the last 12 months. Milan’s Zlatan Ibrahimovic is also in there.

The winner of the prize – designed to revive the spirit of the former European Footballer of the Year gong – will be named in Monaco on August 30.  Read more... (204 words, 1 image, estimated 49 secs reading time)

With today’s confirmation that Zlatan Ibrahimovic has moved from AC Milan to Paris St-Germain here is a list of the top ten highest paid footballers in the world. Note that these numbers reflect club wages, and doesn’t include any taxes that some teams pay on behalf of their players:  Read more... (190 words, 1 image, estimated 46 secs reading time) Dortmund and Bremen, two original members of the league, will begin the 50th Bundesliga slate at Signal Iduna Park in Dortmund on Aug. 24, exactly 49 years to the day the teams first met in league play.