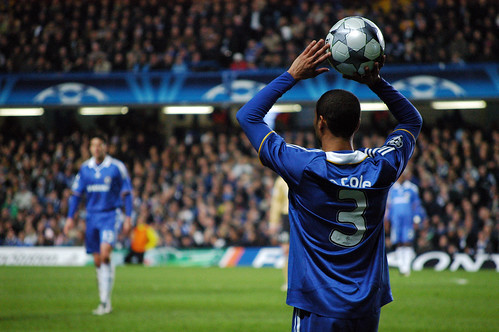 Iker Casillas is one of the most valuable footballers alive right now.  The Spanish national team keeper’s stock has risen even higher this summer by brilliant play in the net for the World Cup champs.  So what’s next on the elite goalie’s list?  A La Liga, Coppa del Rey, and Champions League treble winning season of course.

And considering the fact that Los Galicticos recently hired Jose Mourinho to lead the team is great news for the all whites.  In fact it is probably the best acquisition Florentino Perez has made since taking back over the reins of the organization a year ago.  And the spend happy management wants to please their highly coveted coach by bringing in the type of players he wants.  And who is on the top of the list following Maicon’s announcement that he will remain at Inter?  Ashley Cole of Chelsea of course.

Cole is very bitter towards the British media right now and following his highly publicized divorce from Cheryl Cole, it has been reported several times that the Englishman wants a clean break from the English media and perhaps even from his own Chelsea Blues all together.  And the fact that Cole’s best years as a footballer were when Mourinho was his coach only further leads to the interesting fact that the defender could jump ship now and rejoin the wise one in La Liga.

Casillas obviously wants the deal to be done and he recently admitted that he thinks Cole is “the best left back in the world.”  He also was willing to give his insight into the deal:

From what I am hearing the signs look good. I have only briefly spoken to people at the club but I am confident that he can be a Real Madrid player next year. I think it will be the right move for him both professionally and personally. A clean break from England is hopefully something he is very interested in. It will be his last big contract and who better to sign for than his old coach Mourinho at Real. He will know better than anybody this club will be successful under Jose.

For Cole, being reunited with Mourinho and alongside Casillas, is a tough pitch to turn down.