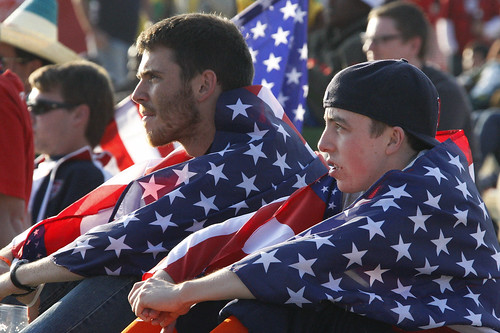 Sorry Aston Villa and other European suitors, but Bob Bradley isn’t going anywhere. The American coach that was often rumored to be leaving is coming back for another four year stint with the USA national team after agreeing to an extension yesterday.

Bradley had been linked in recent months with coaching vacancies in the EPL (Fulham & Aston Villa) and the manager even admitted that he was seriously interested in the move across the pond, but after meeting with the USA soccer federation late last week the two sides have come to a new agreement.

Bradley is contracted to remain with the national squad until the 2014 Brazilian hosted World Cup and the extension proves that the soccer federation must have been fairly pleased with the coach’s results contrary to the rumors that claimed that the federation was willing to part ways with the coach.

Bradley was 38-20-8 in his first four year stint and the coach is the second most successful USA national team manager in total wins behind Bruce Arena. Bradley’s highest high of his four year stint had to be the second place finish at the 2009 Confederations Cup with a victory over Spain in the semifinals and a close loss to Brazil in the final match.

But this summer Bradley’s reign came under much scrutiny as the coach failed to advance past Ghana in the knockout round of the tournament and missed the opportunity to advance through a fairly weak side of the World Cup playoff bracket. And just last week it was reported that former German superstar and 2006 World Cup national team coach Jurgen Klinnsman was keen on taking the job, but those talks reportedly broke down over the week and Bradley became the obvious first choice of the federation.

Bradley’s agent Ron Waxman made the following statement regarding the new deal:

Bob is honored to be the U.S. coach. It’s a job he enjoys very much, and he’s very happy.

Bradley is expected to discuss the extension at a press conference sometime today.