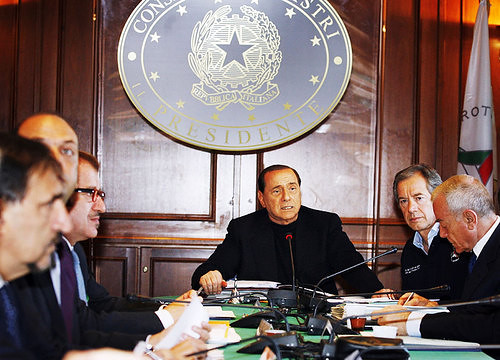 Just as it was reported earlier, Ac Milan are planning some serious rebuilding starting from last summer and with their current dominance in the league, the Rossoneri are looking to improve everything in the summer as their owner, Silvio Berlusconi, promised new signings next season.

Speaking in a Italian TV show recently, the Italian prime minister stated that next season his club are planning to buy one or two more Champions if they wing the Scudetto this year.

“If we win the Italian championship [this season], then in the summer we will sign one or two champions,” Berlusconi stated.

Looking at the meaning of Champions for Berlusconi’s term, the media apparently connected the President’s words with his interest in signing Real Madrid’s star, Christiano Ronaldo, which the prime minister answered as a possibility. The Milan owner isn’t shy in hiding his admiration towards the Portuguese international and although Berlu didn’t confirm that the Rossoneri will make a move on the ex-Manchester United player next season, the Prime Minister did stated that buying Ronaldo to Milanello is his dream.

Cristiano to AC Milan? Everyone has dreams and sometimes they turn into reality. If we were to add Ronaldo to our squad, then I think everyone [at the club] would be pleased.”

Although getting Ronaldo is not an impossible thing for Milan next summer, but it’s still very difficult to do not only because his price would be very expensive but also because Madrid would rarely sell their star players unless that person is declining. Those two conditions are already more than enough to minimize the Rossoneri’s chance in purchasing CR7 next summer, however considering Berlusconi’s habit, in the future the Portuguese international may indeed landed at Milanello

Aside from Cristiano Ronaldo, several names that could be the revered Champions by Berlusconi might be Milan’s ex midfielder, Ricardo Kaka and Dutch’s Arjen Robben, who have much more possibility in arriving next summer rather than CR7. Kaka’s fitness issues at Madrid has forced him to be a number two option in Santiago Barnebau, while Robben already threatened to leave Bayern Munich should the Bundesliga giant fails to qualify for the Champions League next season.