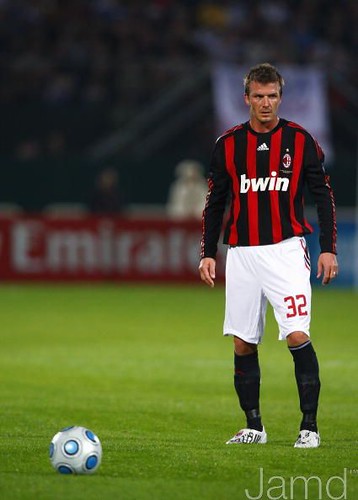 A source close to Beckham said that such an offer would make no sense considering Beckham has no plans of retiring from international football and hopes to find a spot back on the roster and consistently play for the squad in future matches.

And Capello’s statements regarding the Englishman being “too old” have received a flurry of criticisms especially considering Capello had recently expressed his desire for Beckham to contribute in Euro 2012. But following a disappointing early World Cup exit, it appears that Capello wants to involve younger players in the squad and feels that using Beckham to receive a national record number of caps would be pointless for the squad‘s World Cup hopes of 2014.

And considering Beckham plays one of England’s most competitive positions, I can see why the Galaxy man will be overlooked. Capello also stressed in the past that Beckham would have to transfer over to Europe in order to be considered this summer, so I imagine he wasn’t too thrilled to hear that Beckham will probably not play in Europe again and focus on his MLS career from here on out.

But the problem really occurred with the way the foreign-born coach delivered this news. The statement was made through the media and without a proper private conference with Beckham prior to the announcement. Capello should have thought it through a little more and not made it such a bold proclamation. He easily could have avoided making such a statement and simply not picked Sir Goldenballs, but considering the way he made the announcement and the fact that he shut the door on the icon’s hopes for good probably rubbed a lot of people the wrong way.