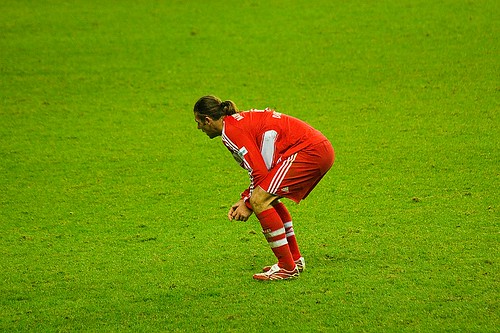 Go ahead and assume the position gentlemen.

Today’s the day when our Quarterfinals legs begin in the Champion’s League.  After all the conjecture and all the talk in the media about who fears who and who can take who we’re here.

Lyon and Bordeaux will easily be a hot match.  They can put together something that will look epic and have us waiting for more come their second leg.  (It should feel like the end of a movie when they set you up for a sequel.)

How do they do that?

Run at each other like there’s no tomorrow.  We could get into the specifics here, but the French on French atmosphere is going to be magnified because it’s in the Champion’s League.  I expect people to be camped outside the stadium ready to erupt at a win or loss for either side.

Bayern and United will also tangle today and we finally get to see how “afraid” Bayern is of Wayne Rooney.  I considered that it might be a media ploy to distract attention from the team in general, but I see that they really ARE afraid of Wayne Rooney.

If you read the headlines today it says that Bayern is preparing for Rooney.  Well, Wayne Rooney isn’t the only guy on United’s team.  In fact, he may not even play the whole match.  So, this leaves other guys on the team up to the challenge as well.

For example, Bayern’s Manager thinks that Edwin Van Der Sar is a “manufactured” Goalkeeper.  Ok.  So he’s manufactured–they’re also HERE–NOW.  What more can you ask from a guy but to make plays.

I look for this latest bit of bulletin board material to keep Bayern out of United’s end most of the match.  Between the defensemen taking an offense and wanting to protect their keeper to Van Der Sar being REALLY pissed off at the insult–I’d say that Bayern might have a couple shots.  But if they see more than 3 I’ll be shocked.

They succeeded in waking United from their slumber.  If United wasn’t already hot they will be even hotter.  Keep your eyes on the French match because this Bayern/United set will be a BLOW OUT.